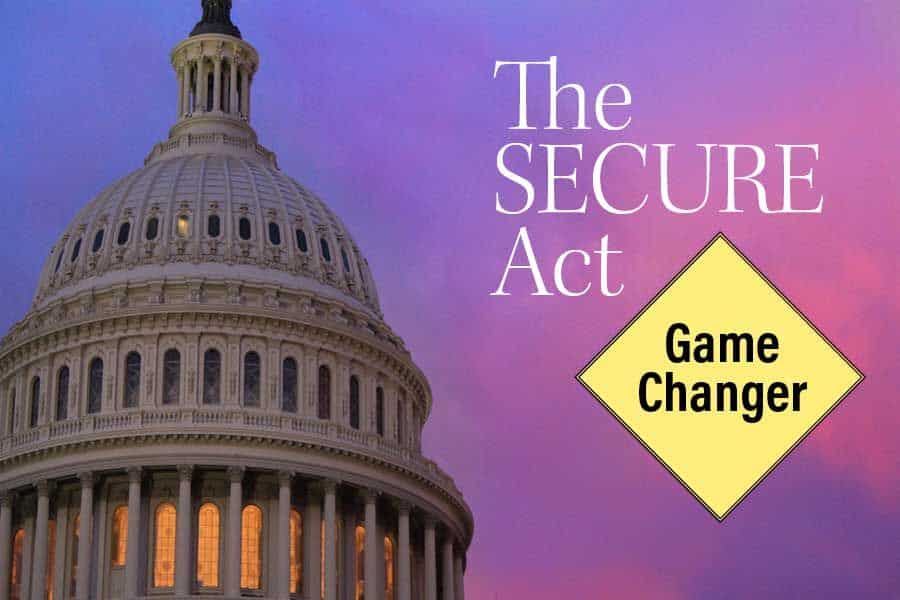 Dalton – For some folks, here’s what we used to do at Berkshire Money Management. When a client passed away, and the beneficiary of their Individual Retirement Account (IRA) was a non-spouse, we’d have the recipient of that inheritance place the money into what we call a “stretch IRA” account. Using a stretch IRA (an estate planning strategy used to “stretch” required distributions over a lifetime) allowed for the assets to have the advantage of growing tax-free for a longer time, as well as keeping the recipient in a lower tax bracket.

The SECURE Act, which is part of a spending bill signed into law on December 20, ended that neat trick. “SECURE” stands for Setting Every Community Up for Retirement Enhancement. What does that mean? It means someone really wanted the initials to spell out SECURE. It also means that if you’ve been planning on using that tax deferment and reduction strategy, you’ve got to learn some new tricks.

Although I don’t like it, the SECURE Act did get bipartisan support, passing in the House of Representatives in July with a 417-3 vote. I like some of it, for sure. It removes the maximum age limit on retirement contributions, which had been capped at age 70 ½. It also raises the required minimum distribution (RMD) to age 72 from 70 ½. But it did some things I don’t like, such as making it easier for people to tap into their IRAs without penalty (I like the idea of encouraging people to save, not spend). Also, and this just disgusts me, it makes it easier for shady brokers to sell annuities within company sponsored retirement plans (that should be criminal, not encouraged).

The estimated cost of the SECURE Act is $15.7 billion. To pay for it, the government took away the stretch IRA strategy. Now beneficiaries must distribute the entirety of their inherited IRA within ten years (with some exceptions, like non-grandchildren minors or the disabled). So now what? Well, let me first do the compliance thing and tell you to talk to your financial advisor and/or estate planner and/or accountant. That sounds like some sort of cop out, I know. But the reality is that there is no one-size fits all strategy to apply here.

If you love the people you plan on giving your money to, you’ve probably been planning on having your financial advisor explain to your heirs what to do when you pass on, because it isn’t automatic. However, I can just about guarantee that you didn’t have that conversation with your heirs – yet. Generally, parents are bad at talking to their kids about their inheritance. The hard stuff is easy, the soft stuff is hard. Those “soft” conversations aren’t easy. For today let’s stick with some of the “hard” stuff, the tactics to save money on taxes. For instance, you could put the IRA in a charitable remainder trust, or CRUT. The CRUT is what’s referred to as a “see-through” trust, which allows people to pass retirement assets to their beneficiaries. That way your beneficiaries could get a portion of the CRUT each year. The remaining funds, which must be at least ten percent of the starting value, will be gifted to charity after a certain period, or after the last beneficiary dies. Some types of see-through trusts are not going to work anymore, so if you had that as a plan, please do have your financial advisor double check which strategy you’re using. For example, because distributions are tied only to mandatory dates, and because under the new law the only mandatory date is the tenth anniversary, money may be tied up. But this is a big bill, with a lot of legalese. Don’t switch to or out of any strategies until you’ve had a conversation with your financial advisor.

You could also leave the IRA to a surviving spouse, and when that spouse passes they could grant it to the intended beneficiary (though that’s going to be complicated for some people in second marriages who want to make sure it’s THEIR biological children who end up getting the money, and not the spouse’s biological children). Or, of course, do nothing. Ten years is not nearly as attractive as spreading it out over a lifetime in terms of managing taxes, but it is better than nothing. And because you can take the distributions any time you want (so long as you take it all within the ten years), your financial advisor can help you calculate when it’ll be most tax advantageous to make those withdrawals.

But you know what? Let’s not get too far into the weeds on this or any other current tactic. After all, the SECURE Act passed on December 20 and goes into full effect on December 31. Meaning, it’s a whole lot better for your beneficiaries (financially) for you to die on December 31, because on January 1 you lose out. Sure, people in the business knew this was coming down the pike for a while now, but the average Jill or Joe just got caught off guard, possibly after years of planning. I’m just not feeling “secure” that the government won’t just rip away the benefit of known strategies. If I recommend a strategy now, I can’t currently feel good that you can set it and forget it. Tax management strategies for your estate clearly need monitoring, not just ideas and implementation.

At BMM we have found that our best strategy is to keep doing what we’ve been doing (minus the stretch IRA), which is to include the adult children of our clients in conversations, including the roles of a trustee, and offer estate planning education. We like the education to be as specific and individualized as possible, but we still find some people don’t want their children to know exactly what they’ll get because they feel as if it will make the kids lose motivation (not to invalidate anybody’s feelings, but that does tend to be far less a problem than parents fear). Yet other clients want the children to know everything because they want to have conversations and offer advice on how to best use the money. (The harder conversations are the ones about inheriting items with emotional value, but perhaps that’s better left as a topic for another day.) From my observation, it’s difficult to talk to your kids about money. And they don’t always want to take your advice. If you need to, use an intermediary; have your kids talk to your financial advisor. We seemingly can’t rely on the government to keep good laws nowadays, so it’s even more important to use communication and monitoring as a tool.

What Happens to the Stock Market After Years Like 2019?

Do you want to know what the stock market does after years as strong as 2019? The quick answer – it does well. The geekier answer (because you knew that was coming) is more precise.

Combining those two criterion (years like 2019, in which the S&P 500 was up both more than 25% for the year and more than 8% in the fourth quarter), the average returns for the index for the Januaries, first quarters, and full years that followed were 1.94%, 4.24%, and 8.38%, respectively. There were ten previous instances that met both these criterion, and for the following January, first quarter, and full year, the index was positive 80%, 100%, and 70% of the time.

According to a WalletHub survey, “nearly 99 million Americans are likely to make financial New Year’s resolutions this year.” https://wallethub.com/blog/financial-new-years-resolutions/9202/ The top financial resolution for men is to save more, while women intend to pay down debt. Here are some of mine, both financial and non-financial.

Get less emotional – There’s a whole lot of peer-reviewed and anecdotal evidence citing that the best stock market trades to make are the hardest trades to do. When you’re in the moment, it’s upsetting to sell at the top and to buy at the bottom. We’re too greedy to sell, and we’re too scared to buy. I’ve been buying stocks (gulp) for nearly three decades and I still feel queasy when making big moves. I doubt I’ll be able to finally feel more relaxed, but it’s a goal.

Read those books – I have nearly 30 books that I’ve bought but haven’t read yet. I will take more time to enjoy the written word. (My favorite book of the year was Malcolm Gladwell’s, “Talking to Strangers.”)

Foster more animals – My house is built for animals. We do a lot of fostering for animals awaiting their forever home, and it started with the New England Basset Hound Rescue. We haven’t fostered Bassets in a while because we’ve been dogsitting a couple beagles for a friend who’s had some medical issues. But we’re hoping she gets well enough to move back home, or at least in with us, and then I can take in some more hounds.

Enhancing estate planning – I’m in the business of hearing new clients say, regarding estate planning, “we’re all set” and I’m like, “oh, yeah?!” Generally, people are never all set. And I think I’m included in that. I mean, I’m way better than most because BMM runs clients through this process. But I want to run a disaster test case to see what steps my wife will take if I’m suddenly abducted by aliens. Does she know where the life insurance policy is? Does she have all my passwords? Has she read and understood the company Emergency Operations Plan?

Get out of the stock market before the next crash. (Pretty straight forward.)

Start a new business – I’ve got one, I’d like to create more jobs.

Give more to the charities I’m close to – As a business owner, you’re always writing a check for a couple hundred bucks here or a few grand there to help local charities and aid in community development efforts. I’d like to refocus on the organizations I have close ties with and be able to really move the needle in their efforts.

Disclosures: Allen Harris, the author of Build It, Sell It, Profit – Taking Care of Business Today to Get Top Dollar When You Retire, is a Certified Value Growth Advisor, and Certified Exit Planning Advisor for business owners. He is the owner Berkshire Money Management (BMM) in Dalton, MA, managing investments of more than $500 million. Allen’s forecasts and opinions are purely his own. None of the information presented here should be construed as an endorsement of BMM or a solicitation to become a client of BMM. Direct inquiries to Allen at email hidden; JavaScript is required.

This article originally appeared in The Berkshire Edge on January 1, 2020.