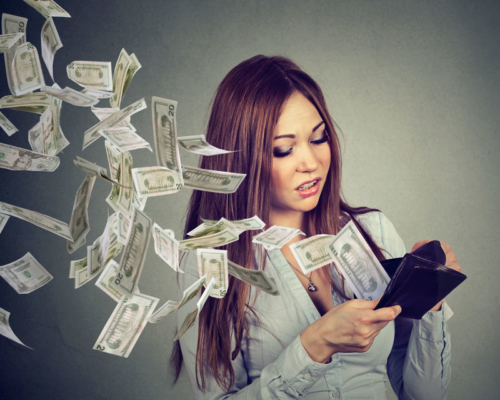 Economists know that consumers spend more when their wealth increases, even if their income remains the same.  However, if wealth decreases, the opposite occurs.

The concept, known as the wealth effect, has spurred the economy for well more than a decade as savers’ 401(k)s and other retirement accounts increased year-after-year. At the same time, real estate values have also risen. Of course, most of the time these gains are only paper profits unless you sell your house or withdraw money from your portfolios.

Nonetheless, there is a behavioral element to this concept. People tend to spend more when stocks and housing prices continue to climb because they feel wealthier and become more optimistic. It is one of the reasons why, in the U.S., consumer spending continues to remain robust—until recently.

The Federal Reserve Bank, in past efforts to control inflation, focused on removing the supply of credit to the financial markets. They did so through hiking interest rates and slowing bond purchases. However, this time around, the Fed is targeting the demand side of the economic equation as well. Reducing demand in this case would require reversing some of the wealth accumulated over the last ten years or more.

During the Covid pandemic, stock portfolios and home prices soared, thanks to the huge governmental monetary and fiscal stimulus that occurred. America’s top income earners, who were working from home, splurged on home remodeling, new autos, durable goods and all sorts of electronics. Trillions of dollars in stimulus checks and unemployment benefits supercharged consumer spending for those who made less.

As a result, all income groups increased spending at rates far faster than before the pandemic. The most recent government survey of retail sales for April 2022, indicated that retail sales outpaced inflation for a fourth straight month. And while inflation climbs, higher earners who already account for a large share of overall consumption, seem willing to keep spending, at least for now.

The wealth effect is causing some consumers to cut back

That retail sales data doesn’t tell the whole story. Low-and even middle-income households are already cutting back. Demand is falling as the wealth effect appears to be working in reverse. Almost 60% of U.S. consumers, according to a survey by brokerage firm Jeffries conducted in April 2022, said they have reduced the number of items they typically buy. In every category, low- and middle-income consumers were cutting back far more than those in higher income groups.

In addition, the National Retail Federation identified that 47% of consumers they surveyed last month (April 2022) were switching to cheaper products and alternatives as well. I have already pointed out this trend in past columns. Consumers are reducing meat consumption, or choosing cheaper alternatives such as chicken, pork, or fish. Supermarket sales of private label brands are booming as well.

But inflation is not the only variable that is impacting consumers. Interest rates are also playing their part. Mortgage rates are the most obvious victim of a rising interest rate environment. Borrowing costs have jumped for 30-year mortgages from a sub 3% level last year to 5.25% today. New home sales in April 2022 fell 16.6% from March and well below forecasts, which was the slowest pace since April 2020. Existing home sales were also falling for the last three months according to the National Association of Realtors.

Auto leases and loans and credit cards are also big areas where higher rates hit the consumer. Most credit cards and car loans are priced off the prime rate, which is in turn closely tied to the Fed funds rate. Consumers can expect those rates to climb higher, since the Federal Reserve Bank is planning to raise the Fed funds rate at least two more times in the next two months.

How the wealth effect is impacting high earners

The big question most economists are asking is when will the combination of higher inflation, declining stock markets, and a possible downturn in the housing market start to reverse engineer the wealth effect at the higher income levels.

So far this year, many investors have suffered anywhere from a 20-30% decline in their portfolios and retirement savings. People are already having to rethink their retirement date as a result. Inflation and supply shortages are crimping remodeling and housing plans even as higher interest rates are expected to put a dent in housing prices soon. As a result, many Americans are starting to feel less wealthy than they did last year.

The Fed is counting on all of the above to change the psychology of consumers from spending like drunken sailors to something a bit more moderate (but not enough to have them swear off entirely). Tinkering with the wealth effect can have unpredictable reactions. How far is too far when you are trying to dampen down demand? It is a fine line, and the Fed’s tools to accomplish this feat are far from perfect.  If they get it wrong, the economy will likely suffer. Let’s hope they get it right.