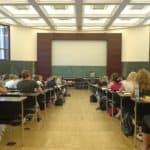 “Does a high school education prepare our youth to enter the work force, escape poverty and become productive citizen of the economy?”

The answer to that question is a resounding no, in my opinion, which creates a problem since the purpose of public education, according to our founding fathers, was the accomplishment of those goals. I believe there is a consensus among Americans that a college education has supplanted high school as a requirement in accomplishing the above goals. In which case, colleges should be tuition-free just like most high schools.

Whether college really does prepare our future generations for “living the dream” is another issue, which leads me to my second question.

“Are we still in the industrial revolution or have we graduated into something more?”

The answer is more important to the future of education and America’s place in the world than just about anything you can imagine. Most people would agree that the U.S. has graduated from an industrial revolution to the “information age,” yet I believe our educational system, thanks to some historical detours, has failed to adjust to this new reality.

A tuition–free college education is an old concept in this country. Baruch College, now part of the City University of New York system, was founded as a free college back in 1847. In 1862, the Merrill Act established public universities through federal land grant. Most states opted to charge no tuition or a nominal tuition. California’s public university system, for example, which remains the largest in the nation, abolished tuition three months after it was founded in 1868.

When WW II ended in 1945, 16 million Americans (one out of eight) were serving their country in some capacity.  With returning vets looking for work, many feared we were heading for massive unemployment and another Depression unless Washington did something about it. In 1944, the GI Bill of Rights was passed. It gave servicemen unemployment checks, low-interest housing, business loans and a free college education.

Nearly eight million vets took advantage of that benefit and in the process drove the U.S. illiteracy rate to 3%, the lowest level in American history. It also transformed our economy, creating a massive Technocracy, while introducing the age of information.

But according to Walt Kelley, one of our readers who sent us his excellent book “Common Sense, A New Conversation about Public Education”, it was the launch of the Russian Sputnik in October of 1957, and our national response to that event, which set American education on a disastrous detour.

Prior to that period, only 18% of Americans went on to college. To meet the perceived Soviet nuclear threat, President Kennedy spearheaded a new educational strategy to answer the Russian menace. In addition to bomb shelters and the like, he argued that higher education would be key to saving our country.  Kennedy exhorted an entire generation of high school graduates to go on to college and become professionals. It was, he said, their patriotic duty and would not only save America but the rest of the world as well.

Science and engineering were the main areas of educational pursuit as part of the “space race”. Those who may have had the aptitude and interest to attend technical schools thought twice about it. After all, going on to college had become a patriotic duty. The Federal government made it even easier to attend by supplying new Federal and state loans. The number of colleges and students attending them exploded in the Sixties.

The advent of the unpopular Vietnam War (and the subsequent disillusion among the 60s Generation) brought on a whole new set of variables that once again stood college education on its head. The nucleus of the anti-war movement was centered in colleges, especially those colleges that charged little or no tuition. The ranks of student/teacher protestors swelled since college students were also exempted from the draft as were those graduates who decided to become teachers.

Given the strong anti-war sentiment among educators in general, less qualified high school graduates were admitted to colleges (thus escaping the draft) and many below-average college graduates opted for teaching rather than a stint in the Army. Avoiding war, rather than getting an education, became the driving force for attending college.

Politicians in Washington, miffed by the growing protests and civil disobedience of both students and faculty, realized that funding these institutions of higher education was at cross purposes with their own war time policies. Ronald Reagan used the University of California’s peace activists as a campaign issue in his 1966 election for Governor and hiked tuitions shortly after being elected. The same kind of thing was happening in New York and other states.

As funding dwindled, tuition-free universities had no choice but to trim costs and begin to boost tuition. Teachers, feeling the squeeze on both their salaries and benefits, began to organize, forming labor unions to protect their jobs and livelihoods. The end result was an upward spiral of ever-increasing tuition costs that continues today.

A second unanticipated result was the decline in the perceived worth of teachers. Teacher unionization on a national scale led many Americans to unjustly compare teachers to similar blue-collar union members in the auto, teamsters and steel industries. At the same time, the quality of new teachers was thought to have declined as the result of the draft evading tactics of the Vietnam Era. This, combined with the poor results of the American educational system in general, gave teachers a bum rap that has continued to this day.

As the U.S. educational system continues to decline, despite the best efforts of both government and the private sector, I don’t believe free college tuition will solve America’s educational dilemma although it may help future generations make better career choices.  In my next and final column on free colleges, we will address the broader issue of the future of education in this country. Stay tuned.