Charles Schwab’s sixth-annual Modern Wealth Survey revealed that people with money do have a heart. Almost three-quarters of the American respondents (73 percent) say that their values govern their life decisions. And almost as many (69 percent) say their top financial considerations support causes they care about. When deciding where to place investment dollars, Americans consider such things as the company’s reputation (91 percent). Corporate values (81 percent) are nearly as crucial as traditional factors. The company’s financial performance (96 percent) and the price (93 percent) still mattered the most, but barely. 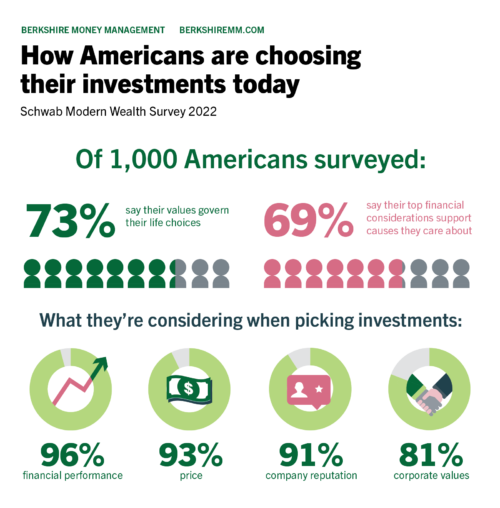 These values carry over to the workplace. More than 8 in 10 (84 percent) say their values guide their employment decisions. Nearly 6 in 10 (59 percent) would accept a lower salary to work for a company that better reflects their conscience.

What does money mean to you?

I am happy to see that Americans with money continue to be philanthropic. They can be. They should be. The global average annual salary is just under $18,000 per year. A heuristic for being able to retire comfortably is to do so with 10 times your salary. Globally, that means people, on average, would feel “financially comfortable” (as the study calls it) retiring with $180,000. (Although, let’s face it, there’s not a lot of room to save with such a low income.)

Are you financially comfortable?

To feel “wealthy” in 2022, Americans need $2.2 million. The numbers to feel wealthy and financially comfortable are up from 2021 but down compared to before the pandemic. Since the last Capital Ideas column, the rich got richer.

There’s more to explore in the complete report on Schwab’s website.

Allen first reported on the results of the 2022 Modern Wealth Survey in The Berkshire Edge on June 6, 2022.

Are financial questions keeping you up at night? Financial Advisors Holly Simeone, CES™ and Lauren Russo, CEPA, FPQP™, CVB, together with Paraplanner Angela Elzner, FPQP™, invite you to invest in your financial health by joining them during Open...
President Biden and the U.S. Department of Education announced a plan on Wednesday, August 24, to provide further assistance to federal student loan borrowers. If you have private loans only, unfortunately this won’t apply to you. But...
Is the U.S. economy currently in a recession? The National Bureau of Economic Research isn’t officially calling this a recession, but after two consecutive quarters of declining GDP, Berkshire Money Management Founder and CEO Allen Harris is convinced...