While politicians bicker over the Fiscal Cliff, the government continues to borrow about $4 billion a day. The statutory ceiling on U.S. Treasury borrowing is $16.4 trillion and we will hit that number by year-end. Then what? 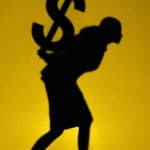 If Congress refuses to raise the borrowing limit, we can expect the government to run out of options to avoid a default sometime by the end of February, 2013. If we default, even technically, the credit agencies are ready to downgrade our debt once again. You may remember the drama and hysterics that last year’s debt limit crisis invoked.

For months, pundits predicted dire consequences if the rating of our sovereign debt was downgrad by the big three credit agencies. Foreign holders of our debt would abandon us, they said.  Interest rates on all sorts of debt would skyrocket. There would be a stock and bond market crash. Standard and Poor’s did actually cut our debt rating from AAA to AA+. Contrary to the predictions of these Cassandras, bond prices actually went higher and rates lower; so much for the vaunted power of our credit agencies.

Readers may recall why that downgrade happened.  Last year was the first time in history where Congress turned what had been a pro forma vote to raise the debt ceiling into a hostage-taking crisis. In exchange for their approval, congressional republicans demanded huge spending cuts. One can fault the president for going along with that game, instead of simply raising the debt ceiling on his own and dealing with the consequences.

But President Obama has made it clear that last year was a one-time event. He is insisting, as part of the Fiscal Cliff negotiations, that Congress relinquish its control over the debt ceiling. He is right, in my opinion. Using the nation’s borrowing ability for political gain is unacceptable.

The 2011 debt ceiling farce also marked a turning point in a number of areas. It was the seminal event that reversed this country’s priority from job creation and economic growth to austerity. It also resulted in the down grading of our nation’s debt by a credit agency. It is also worth noting that S&P’s downgrade decision was politically motivated.

The credit agency, in its explanation for their negative rating change, explained that based on the 2011 debt negotiations, that the U.S. government’s ability to manage fiscal policy was “less stable, less effective, and less predictable.”

In one of those paradoxes of history, going over the fiscal cliff would actually avert any further downgrade to our debt status. The expiring Bush tax cuts and automatic spending cuts across the board would do quite a bit to alleviate the stated default-related concerns of the credit rating agencies. The tax cuts would generate around $4 trillion in new revenues over the next decade. That is almost the exact amount most credit agencies are looking for in deficit reduction in order for our fiscal house to be out of danger.

Of course, going over the cliff and staying there will present the nation with another set of economic problems. Both sides agree that the combination of tax increases and spending cuts of that magnitude will both raise unemployment and slow the growth of the economy. It could actually tip us back into recession. One would think the risk of default for any nation would climb as a result.

Back in September, Egan-Jones, a smaller credit rating agency, downgraded American debt from AA- to AA-, citing Federal Reserve plans to stimulate the economy (QEIII).  They argued the plan would reduce the value of the dollar, do little to stimulate the economy and artificially raise the price of oil and other commodities. That would, in turn, hurt U.S. businesses and the consumer. They indicated that the risk of inflation, rather than the risk of default, was the justification for its downgrade.

In which case, if we do fail to come to a compromise, fall off the cliff and, as a result, experience a decline in economic growth and inflation, will the credit agencies actually revise their ratings upward? It would appear they would have to since the basis of their downgrades was politics and lack of fiscal austerity (S&P’s reason) and inflation (Egan-June’s argument). We will have to wait and see how this same group that missed the entire sub-prime debacle handles this one.