Only four states have legalized marijuana for recreational use so far. Another 23 have given the nod for using cannabis for medical usage. Today it is a $2billion industry that is set to grow substantially in the years ahead if more states jump on the band wagon. 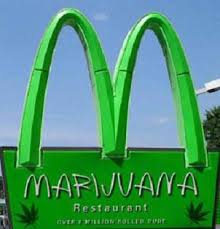 Whether legalization is a fad or a trend in this country will have to wait until the next election cycle in 2016. Legalizing the drug will most likely be on the ballot in several more states. Researchers from California-based The ArcView Group, a cannabis investment and research firm, predicts that 14 more states will legalize marijuana while two more will legalize medical marijuana next year. In addition, at least 10 more states are “considering” legalization, according to them.

Since the latest polls by Gallup indicate that only a slim majority (51%) of Americans favor legalizing marijuana, those projections may prove to be overly-optimistic. If they did materialize, that would place legal marijuana as the fastest growing industry in the United States. To date, only four states—Colorado, Washington, Alaska and Oregon—have developed a retail trade in legalized marijuana. D.C. has also legalized the drug, but sales are currently banned. Congressional Republicans have blocked the new law.

Remember too that the Federal government still considers marijuana a dangerous drug (a Schedule 1 controlled substance like heroin or LSD). And clearly, there are a number of legislators that are bound and determined to keep it that way. As a result, if you are thinking of entering this business you should be aware of the drawbacks and political risks before ripping up the tomatoes and re-planting your back-yard with pot plants.

Since banks are federally-regulated, very few of them are willing to loan newly-minted pot entrepreneurs the seed money for a start-up (no pun intended). You can also forget credit card transactions as well. This is a purely cash business. Not only will you need your own start-up capital, but without access to banking, you are going to need to pay your staff, your suppliers and even your taxes in cash.

There may be some long time growers and users of marijuana out there that think they have an edge once pot is legal. That may prove to be an erroneous assumption. Legalization, like the end of Prohibition for alcohol, creates two opposing changes in growing and selling marijuana. It provides downward pressure on pot prices. The same ounce that sold for $300, may now only command $200. Second, the supply of marijuana suddenly expands considerably as new growers jump in.

In that kind of environment, quality of product becomes one of the critical factors in the sale and profitability of production. Competition is fierce. Those with the resources to grow their crop scientifically, using the best and latest bioscience, fertilizers and equipment will end up on top. All of that costs money and a lot of it.

In addition, you will need to brand, market and distribute your product. Handing off the “dime baggie” at your local park won’t cut it. After all, you are trying to get on the ground floor of what you hope might be the next Wholefoods in the marijuana business. To do so, and do it profitably, is going to take a lot of business knowledge, retailing know-how and luck. Do you have what it takes?