There is talk that this country could be the Saudi Arabia of natural gas. It’s clean burning, domestically produced, abundant and offers a concrete exit plan away from this nation’s foreign energy dependence. Yet, from Texas to New York Americans appear to be willing to take up arms against any additional gas drilling. 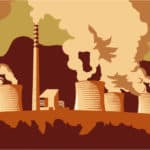 As recently as five years ago in the U.S., natural gas was in short supply using traditional exploration and drilling methods. Then, engineers had a breakthrough. Two key technologies were discovered—horizontal drilling and hydraulic fracturing (fracking) — were discovered. Horizontal drilling allows gas developers to drill vertical wells that turn and snake more than a mile sideways under the ground. Fracking, which was actually invented more than 60 years ago, involves pumping millions of gallons of chemically-treated water into deep shale formations at enormous pressure. The fluid cracks or widens existing cracks in the shale freeing hydrocarbons to flow toward the well.

As a result of these technologies, vast caches of natural gas trapped in deeply buried rock have been made accessible leading to an eight-fold increase in shale gas production. One of these deposits, the Marcellus Shale sprawls beneath West Virginia, Pennsylvania and New York. This deposit alone could produce enough energy to fuel every natural gas fueled device in the nation for the next 20 years.

Natural gas prices have plummeted as a result of all this new supply and are now trading at ten year lows ($1.94 per 1,000 cubic feet). The prognosis by experts is that prices aren’t going to rise anytime soon since there is so much gas still in the ground that the energy industry, policy makers, economists and natural gas customers can’t figure out what to do with it.

It has already been a great boom to both residential and commercial users of the fuel. The typical consumers spent $868 on average this winter, a 17% decline from last year. Utilities that generate electric power consume 34% of the nation’s natural gas output. Decline in gas prices are being passed through to customers, who are beginning to see their utility bills decline throughout the Northeast.

Another 30% of natural gas is consumed by industries to heat boilers or make chemicals, fertilizers and plastics. Prices have come down and supplies have reached a level that major corporations are announcing large-scale expansion projects close to the sources of these new natural gas discoveries.

Dow Chemical has announced plans to build a multibillion dollar plant to convert natural gas into the building blocks of plastic in Freeport, Texas. Royal Dutch Shell is building a similar $2 billion chemicals plant near Pittsburg, PA, close to the output from the Marcellus Shale. These are but two of thirty chemical plant projects that are ear-marked for the U.S. over the next five years.

Steel and iron producers are also excited at the prospect of saving over $11 billion annually through 2025. Steel maker Nucor is switching from coking coal to natural gas production of their iron products in a new $750 million plant in Louisiana. The trucking industry that now consumes just 0.1% of natural gas production is looking at a crash program to build natural gas refueling stations along America’s interstate highway system to refuel new long-haul trucks that will burn natural gas.

All of this expansion means jobs. Economists predict as many as 500,000 new jobs by 2025. At the same time, if we can build the infrastructure to transport and convert our nation’s existing oil-based economy to consuming natural gas over the long run, we no longer need fear turmoil in the Middle East. The whims of OPEC will be a thing of the past. At the very least, America could join the league of energy producers/exporters and begin to export our surplus gas to foreign buyers. Europe, for example, pays 75% more for their natural gas than we do.

All of this sounds wonderful, yet there is a darker side to this “Gas Rush.” Homeowners across the nation in those regions where natural gas is being exploited have witnessed their once-pristine communities become industrial sites. In place of their willow trees or pastures, sprawling plants lit by huge flares late into the night blotting out the moon and stars.

Trucks rumble through neighborhoods spewing noxious fumes that mingle with other possibly toxic substances.  Neighbors keep children and pets behind fences away from containment ponds filled with unknown chemicals. They worry about the drinking water and hold their breath as earthquakes make the windows and china tremble where no such quakes had occurred before.

In our next column we will examine the darker lining within this pink cloud of natural gas abundance. Opponents of fracking argue that the risks outweigh the rewards in any further development of natural gas. Here we are on the verge of a possible renaissance in American manufacturing and yet New York, New Jersey and an increasing number of municipalities and local governments are ordering a halt to further development.

Is that wise or is America once again shooting itself in the foot? What do you say?