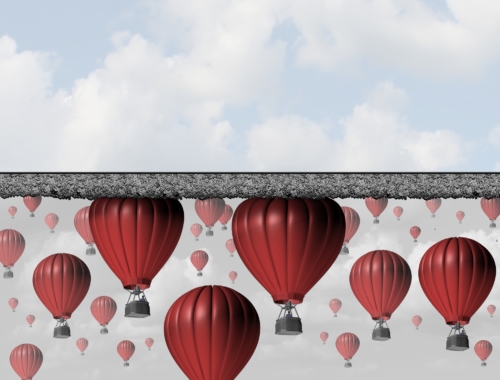 Last week, investors suffered through the gloom and doom of a declining market. Many Wall Street equity strategists added to the angst by predicting terrible times ahead. I begged to differ, counting on dip buyers to save the day once again. And that is exactly what happened.

In case you missed it, last Friday, the S&P 500 Index was at an important level, hovering just below its 50 Day Moving Average (DMA). This had happened several times before since March 2020, and each time buyers appeared to “buy the dip.”

“I suspect they will again,” I wrote, “so, no, I won’t get bearish quite yet. I will go the other way and predict that markets will bounce next week. But what if I am wrong? Technically, the downside risk could be another 80 points (1.8%) to around the 4,365 level on the S&P 500 Index.”

As it turns out, I was right on both counts. Buyers swooped in at the lows an hour before the close on Tuesday, September 21, 2021.  The S&P 500 Index ended the day at 4,357, just eight points lower than my worst-case scenario. We proceeded to rally through the remainder of the week, regaining the 50 Day Moving Average and then some.

That doesn’t mean we are quite out of the woods just yet. This week, the children in Washington, D.C. that we call our “legislators” are once again squabbling over increasing the nation’s debt ceiling. The federal debt ceiling has been raised more times than I can count, but it has never been reduced.

In 2019, the debt ceiling was suspended for two years under a bi-partisan agreement. At the time, former President Donald Trump was busily increasing the nation’s debt by $7.8 trillion (after promising he would reduce it). Instead, Trump engineered the third largest increase in our debt (relative to the size of the economy) of any U.S. president in history. The federal debt rose from $19.95 trillion in 2018 to $27.75 trillion by the end of his term—up 39%, or 130% of GDP. Why am I bringing this up?

Because the Republican Party opposes raising the debt ceiling. I won’t bore you with the details, other than to remind readers that the debt ceiling today is where it is because of yesterday’s bills. Specifically, it is the spending that was authorized and spent by those very same Republicans who now refuse to pay their bills. Wall Street, one would assume, is totally inured to this theatre, but I suspect it still may cause some temporary volatility throughout the next few weeks.

In addition, there may be some drama next week around funding the government. A spending bill—called a “continuing resolution” — that would keep the government running after its current fiscal year ends on September 30, 2021 — needs to be passed, or the government could shut down.

Government shutdowns have happened before, most recently when the former president held the country hostage demanding billions for his now rusting and dilapidated “Wall.” The markets took this in stride. All he really managed to do was make the holidays miserable by denying paychecks to thousands of government workers.  In any case, a shutdown could add uncertainty to the markets.

Of course, the market-moving news this week was the upcoming tapering of bond purchases by the Federal Reserve Bank. On Wednesday, Fed Chairman Jerome Powell, after the FOMC meeting, announced that the Fed had met both its inflation and employment targets and the time to taper was coming. It could be as soon as November or December—barring any unforeseen pitfalls. He left the door open to delay if something like an upsurge in the coronavirus threatens the economy.

The meeting notes also revealed that the committee membership was about evenly split on when they might begin to raise interest rates. An interest rate hike could happen as early as next year or be delayed into 2023. The markets took the announcement on board, and while the news was decidedly hawkish, investors were expecting it. Stocks rallied further on Thursday (September 23) and into Friday (September 24) before some profit-taking set in.

This should go down as a September to remember, and it is not over yet.  In the days and weeks ahead, we may suffer through another such pullback and test some of those lower levels of last week. If we do, I suspect the dip buyer will again save the day. In the meantime, stay the course and stay invested. Next up, October.