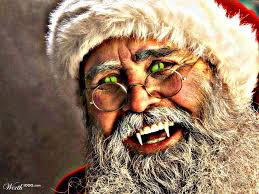 Time is running out for that Santa Rally. The declining oil price, coupled with continued uncertainty over the normalization of interest rates, is having a Grinch-like effect on the markets.

The price of oil continues to make multi-year lows, as does natural gas, and the feeling among traders is that energy prices will go lower through the end of the year. The next technical level for West Texas Intermediate crude is around $32/bbl., which is more than two dollars below today’s price. As I wrote last week: “where oil goes, so goes the market.”

There is still an atmosphere of uncertainty lingering among investors after the Federal Reserve’s Wednesday decision to raise the Fed Funds rate by 0.25%. On the day of the announcement, there was what is called a “relief rally.” Investors were relieved that the central bank had finally made good on its promise to begin the process of normalizing interest rates.

By Thursday, however, the debate began over how long it would be before the Fed raised rates again and by how much. After nine years without a rate hike and seven years of depending on the Fed to keep equity markets climbing, the transition to an economy-led market will take time. I suspect that investors and traders will now parse every new data point for some clue on what the Fed will do next.

Unfortunately, that is a sucker’s game, since we all know that economic data when first released is notoriously inaccurate. That data is further revised and revised again before an accurate number can be determined. Nonetheless, traders will react first buying or selling on what they perceive are the facts which will leave the markets susceptible to even more volatility. The facts are that a single data point won’t reveal anything. It is the trend that will count and that requires patience and a longer-term view of where the economy is going.

Two-thirds of traders, brokers and money managers lack any experience at all in a rising rate environment. In addition, traders today and most others on Wall Street are focused on the short-term to the exclusion of anything else. They lack perspective. I would argue that by their nature, high frequency traders, day traders and those who make a living by generating trades via computer algorithms will struggle to make money for themselves or their clients under this new scenario.

By comparison, those who have a longer time horizon and do their homework should do well. Invest in those areas of the economy that will benefit from rising interest rates or will grow despite rising rates. Pay attention to currencies and follow foreign markets. Too many Americans are U.S.-centric. That will prove to be a detriment in the years ahead.

In the meantime, the markets will need to recover their mojo and that will take time. Unless some miracle occurs between now and the New Year, the most one can expect from oil and gas prices is a dead-cat bounce. If that happens (and no one knows if it will), the stock markets will bounce with it.

I’m hoping that will occur, so we can close out the year with some gains. As I have said all year, those gains would be single-digit at best here in the U.S. Right now both the S&P 500 Index and the Dow Jones industrial Average are negative for the year, although not by much. There is still some possibility that the markets could recover over the next ten trading days or so. I’m hoping they do.

You did okay this year, if you had taken my advice and hedged your currency exposure, while investing some money in Europe, Japan and China’s Shanghai Index early in the year. The Europe 600 STOXX index is up over 14% year to date. Japan gained 8.8%, while China gained 10.6%. If you had ignored the currency, your returns in Japan and Europe would have been far lower. My strategy of hedged investing in overseas markets to enhance returns was the right move.

In the weeks ahead, I will turn my attention to what I see unfolding next year, not only here but abroad. Stay tuned.