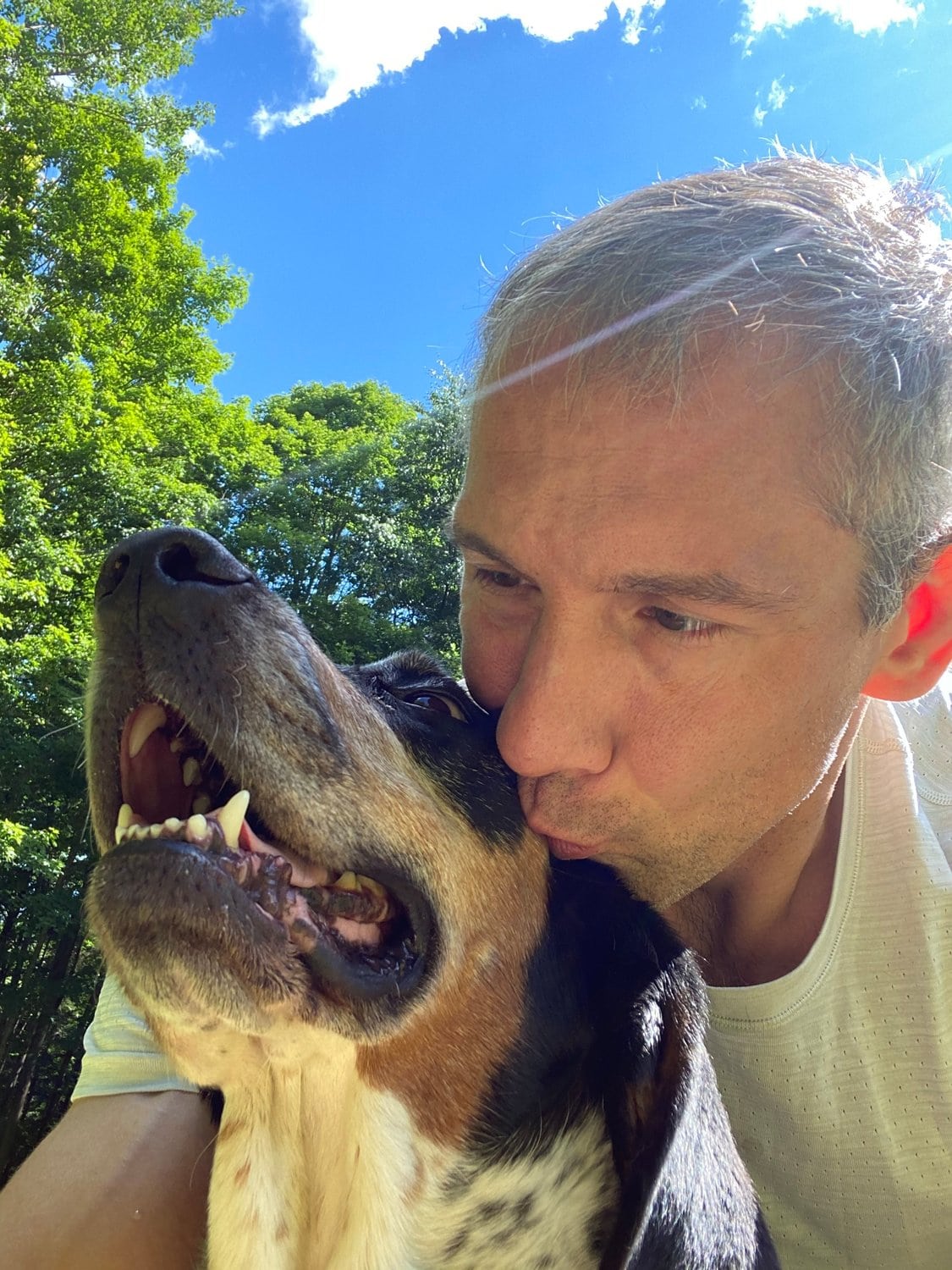 That threw me for a minute, as I had assumed I was talking to a tough guy.

Harris, 47, lives in the town where he grew up. People who know him say he’s in his element when hitting the “go” button on a new investment strategy, or hitting the weights or a heavy bag.

But, ask the man, and Harris will tell you that his favorite place on Earth will always be “in my own backyard, playing with my dogs, Riley and Talula.” When he says it, I think I almost hear a melting sound.

The chief executive officer and founder of Berkshire Money Management — with headquarters, you guessed it, in Dalton — spoke with The Eagle this week as part of a special series sponsored by his firm — to shed some light on these tumultuous financial times, and point out that, yes, calmer waters are ahead, but not without some rough patches, too.

Q: What brought you to the business of money management?

A: It was the relationship that I had with my father; it continues to this day. He was a butcher by trade, but there were a lot of conversations that we had around money. It was pretty interesting to me. One day, when I was over his shoulder, looking at a mortgage statement, I saw it said that we owed $19,000 on our house. I was a kid, 6 or 7, and I cried. It was awful. But, then he explained to me the difference between good debt and bad debt, and how to manage it down. We continued those conversations for over a decade. To this day, they’re probably our biggest bonding conversations. Some dads and sons talk about how the football team is doing, and we talk about how Apple stock is doing.

Q: What money lesson should be taught in school but isn’t?

A: As far as investments go, that it’s more psychological than mathematical. One of the reasons why people fail to do better than average is because they tend to be very emotional, and it’s not their fault. There’s a part of the brain called the amygdala, that controls fight, flight or freeze. Your body has this evolutionary need to protect itself. You feel relief from running and hiding. That’s really, really hard to overcome. You do have to think about the math behind it. People will generally buy stock not on the value of the enterprise they’re buying. They buy it based on it going up or down, and hope they can capture and sell it to the greater fool. Actually looking at the business, as opposed to looking at the stock, that’s how you get the emotion out of it. When there’s emotions involved in it, you’re probably not really going to overcome it, so the best thing you can do is understand what those emotions are, how they’re affecting you, what’s going to make you buy something (greed), what’s going to make you sell something (fear). What you should be doing is buying the enterprise.

Q: What’s your overall outlook on the market?

A: There’s a lot of cities and states that are going to have to practice significant fiscal austerity, to balance their budgets — and they must balance their budgets. If there’s not a federal fiscal policy that soon addresses the revenue gap of cities and states, we’ll see another recession in 2021. Not of the same magnitude, but enough where it’s certainly going to affect the stock market, jobs and household wealth. The “pandemic recession” is over with. Things still are bad, and they’re going to get worse again if we don’t address the funding gap. But we’re getting better, and that is excellent news for the stock market. But it’s going to get worse, if we don’t address that funding gap.

Q: What about a period from the past that best illustrates the market of today?

A: Over the last century, there’ve been 13 instances of what I call a “waterfall decline,” the sharp drop in equity prices over a couple months; then, there’s a brief rally, but the volume stays lower, and it muddles around for a while. In 12 of 13 of those instances, the market touched down on those same lows again; the only exception was in 2018. The pattern of the post-waterfall decline does tend to be pretty similar in most instances. One of the most dangerous things you can say in this business is “it’s different this time.” It would not be an exceptional occurrence for the market to go down again.

Q: Is there money to be made now, during a worldwide crisis, and what does that look like?

A: Celebrity investor Jim Kramer from CNBC said, and I’m paraphrasing, that “there’s always a bull market somewhere, and I promise to help you try and find it.” There’s risk that is associated with participating in that bull market. Yes, there is always a way to make money. In the global financial crisis, when everything was melting down, we came up with a fairly clever way to use FDIC insurance to short the market, to bet the market was going to go down. So there are ways to make money during a crisis, especially when that next crisis is a recession. The best and the biggest money tends to be made post-crisis or during the crisis, because that’s when prices tend to hit their lows. For me, I’d rather make 10 percent safely than 20 percent with a huge risk, where I could be out a significant amount of money. So I wouldn’t overly focus on crisis investing. That’s a nimble person’s game, and I tend to be more conservative than the nimble person who’s looking to make money over a two- or three-month timeframe. But I will run and hide before and during a crisis and then reallocate aggressively in the midst or coming out of that crisis.

Q: Why not just protect and preserve current holdings and assets?

A: That’s really job number one. The foundation of what we do is to make sure that people can get into retirement and satisfy all their needs, wants and wishes, and make sure they’re successful in accomplishing that. More often than not, it doesn’t mean we have to take big risks to get them there. Typically, it’s about preserving what they have, which is much more important than doubling up on what the market might be giving. In January, we already were preparing for a recession, so we started hedging investments with an option strategy to protect portfolios, with a buffer built into them. In something like the pandemic that we went through, we focus more on preserving capital so we’re able to do so with an option strategy, so if things turn around, investments would have some level of return. Those who profess to be aggressive investors, are aggressive until the market goes down 20 or 30 percent, and then they have a reassessment of how they feel toward that volatility. It’s our job to determine when to put the brakes on and when to hit the gas, in terms of how aggressive or conservative you might want to be.

Q: What does a relationship with Berkshire Money Management mean for clients, for today and tomorrow?

A: The answer is boring, not because it’s a boring response. Our job is to remove uncertainty and drama. It’s not intended to be exciting. We make sure a client’s business and family are protected. They want boring; they want certainty. They want that peace of mind. The clients we work with really want that answer. We’re not trying to get 100 percent returns in a couple years. We’re looking to do what the market does when it goes up, but then not go down when the market goes down.

Have questions about what Berkshire Money Management can do for your financial future? Visit Allen Harris and his dog-friendly team at berkshiremm.com, or call 413-997-2006 or 888-232-6072.

This article, by Noah Hoffenberg, originally appeared in The Berkshire Eagle on June 28, 2020

Stop in for free, judgement-free financial advice! Financial Advisors Holly Simeone, CES™ and Lauren Russo, CEPA, FPQP™, CVB, together with Paraplanner Angela Elzner, FPQP™, invite you to invest in your financial health by joining them during Open Office...
Nurses and other healthcare professionals in the Berkshires and across the United States find themselves in a unique retirement situation: the 403(b) offered by their employer can be stewarded by the financial management firm of their choosing...
To Our Family of Clients, Last year felt like it would never end. It wasn’t as bad as 2020, but we still felt the weight of the COVID-19 pandemic. In contrast, 2022 felt like a blur. This was...