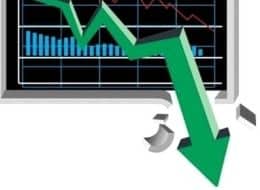 The third quarter was the worst for stocks in four years Here we are in October and if history is any guide, investors should expect a bottom in the stock markets over the next three weeks.

That does not necessarily mean that history is a dependable guide. Historical data has proven to be less than helpful over the last few years. That is largely because the central bank’s heavy hand in the financial markets since 2008 has skewed the data. Their intervention in both the bond and stock markets has made technical as well as fundamental tools of investing all but meaningless in valuing the markets.

I have been expecting the stock markets to re-test their lows made on August 24th, something we have yet to accomplish. Until we do, this correction will continue. Last week we got close (within 4 points on the S&P 500 Index). But markets tend to overshoot. It would not surprise me if we actually broke those lows and fell even further. That would create a panic among investors, in my opinion. And panic is what usually signals a bottom.

In addition, October is the perfect month for this to occur. The historical pattern indicates that this month should begin badly for the markets, but reverse course by the end of the month. The only problem with this scenario is that almost everyone is expecting the same thing. As a contrarian that worries me.

Certainly there is little evidence so far of the kind of reversal I am expecting. The news seems to go from bad to worse. Friday’s unemployment number was much weaker than economists were expecting and triggered worries that the U.S. economy might be stalling. I don’t believe you can base your assumptions on one data point, no matter what it is. The unemployment numbers have been notoriously unreliable when viewed week-to-week or even monthly.

But that didn’t stop the algorithmic computers and day traders from hitting the sell button across the board on Friday morning. Investors can expect the wilds swings that we have been experiencing over the last two months to continue a bit longer. I know that most readers are worried. The tendency is to check your portfolios more and more frequently. As the stock market declines, commentators and the media always become more bearish and so will you.

The atmosphere becomes charged with emotion. As more and more pundits turn negative, they try to outdo one another in painting “what if” scenarios. The markets “could” drop much further, they say, without explaining why that would be the case. These are the same jokesters who were screaming “buy, buy, buy” at the top of the market. My advice is to ignore the circus.

Focus on what is important. Yes, your portfolios are lower than at the beginning of the year, but that doesn’t mean that by year-end those paper losses won’t be paired or completely disappear. I still think we will end the year positive, if only by single digits. That’s why I have not changed my forecasts. So far just about everything that has happened has gone according to my playbook. Keep the faith and keep invested.