Millennials are feeling good about their financial future, says one survey. Another poll tells us that this same class of Americans is giving up on getting rich. Both can’t be right and yet they are. 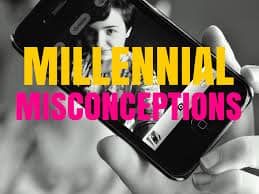 The first thing you have to understand is that attitudes change depending upon one’s circumstances. In a recent poll by Bloomberg, for example, 47% of Americans between the ages of 18-35 believed that they do not expect to live better than their parents.

That is understandable if, for example, you happen to be living under your parent’s roof (and 15% of millennials are). It is darn difficult to imagine living better than your folksunder those circumstances. This is especially true if your own parents owned a home at your age. But is this a permanent situation or will   higher income and a relaxation of strict mortgage lending standards change their perspective in the future?

Student debt can also impact a young person’s attitude. How can one save for the future or put a down payment on a home when every spare cent you make is ear-marked to pay off that student debt? However, over time, that debt will disappear, if and when it does, will the millennials attitude change as well?

You can find the same contradictions throughout the workplace. Polls tell you that social media has turned these Millennials into team players. At the same time, this same group hates to be managed and is allergic to ideas of careerism. Some research will tell you the opposite: that competition is their driving force and they do not have much faith in their co-workers,

I could go on and on, but what explains these contradictions, in my opinion, is trying to generalize about a generation when much of what is going on is simply part of the aging process. A generation whose birthdates spans twenty years (from 1980-2000), will experience changes in attitudes as they grow older and acquire more experience, especially in the work world.

Today we all want to apply our modern behavior studies and technologically sophisticated marketing tools to pigeon-hole a demographic group that is changing all the time. Like generations before them, the Millennials who have been on the job ten years will have a different perspective (and income) than those just starting out.

Does that explain away all the differences between the Baby Boomers, for example, and this Generation “Y”, of course not? In prior columns, I have identified many differences, such as their reliance on social media to communicate and access knowledge and news. Consumption patterns are clearly different from choosing less than more in living space, in valuing experience over acquiring “stuff” and in many other attitudes involving everything from social values to raising children.

The point is to sort through fact from fiction and identify the generational differences, which may not be as large as we think, and the more transitory and age-related changes that every generation experiences.