While October’s employment gains, 271,000 new jobs, should be cause for celebration, the stock market fell and interest rates rose. What’s behind Wall Street’s disappointment? 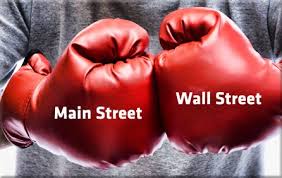 The gain in jobs was clearly an upside surprise, since economists were expecting a gain of, at most, 180,000 jobs. This follows two months of disappointing job growth. The job number, which you should remember is subject to several revisions, puts the unemployment rate solidly at 5%. Officially, we are close to “full employment” and an unemployment rate lower than that would most probably mean more worker wage increases.

What’s wrong with that, you might ask, since few of us have seen a wage hike in years? Well, for Main Street, rising wages means we make more money, spend or save more, and maybe go to a dinner and a show on a Saturday night. Investors, on the other hand, are much more worried about wage inflation and what that may mean for the future level of interest rates.

Readers are aware that I have been watching the rate of wage gains for months. I believe that is the canary in the coal mine as far as the Fed is concerned. While the employment numbers have reached the Fed’s target, the inflation rate is still well below their stated target rate of 2%. In my opinion, a rising rate of wage gains closer to the historical average is key to their decision of when and how much to raise interest rates.

Historically, when studying past economic recoveries, one should expect yearly wage gains of between 3-4%. So far in this recovery, wages have risen slowly, just 2% annually. However, October’s report had wage gains higher than at any time in the last 12 months. Wages gained 9 cents an hour to $25.20, a 4% gain for the month. It was the largest gain since July, 2009, but the yearly rate is still running well below historical averages.

While investors immediately upped their expectations for a December rate hike, and sold off the stock market as a result, I’m still not convinced. I suspect that the central bankers are playing a waiting game, where they want to see wage gains at an even higher level; saying that, the wage rate and employment gains are certainly moving in the right direction.

Jobs, according to the data, were spread out across the economy with big employment gains occurring in construction, health care and the retail sectors. While some of the progress in retail may only reflect extra hiring in preparation for the holiday season, it’s hard to dispute the strength of the overall number.

As for the markets, after breaking through the 2,100 level earlier in the week, the S&P 500 Index is suffering a mild bout of profit-taking. That is a good thing. We have had 4-5 weeks of substantial gains and a period of consolidation is in order. I suspect it won’t last long.

Traders will continue to fixate on whether or not the Fed will raise rates in December, on the price of oil and the strength of the dollar. Last month’s issues—the “perceived” weakness in China, Europe and emerging markets—are seemingly distant memories. In a market that is so occupied with short-term events, and has no memory from one day to the next, it pays to be long –term in one’s thinking.

What really counts are the strength of the U.S. economy and the impact of central banks worldwide in bolstering the growth rate of their economies. In both cases, the future appears promising. As a case in point, have you noticed what is happening in China? That market is now up 20% from its lows and the country’s economic data seems to be stabilizing. In Europe and Japan, there is more of the same. I expect these markets will continue to do well through the end of the year. Ignore the noise and stay invested. The best is yet to come.