Given that most Americans grow up with little or no idea of how to save, budget, or spend money, it might be a good idea to ask why. It begins with the family but discussing money in this country is as uncomfortable as talking about sex. That needs to change and it starts with our children. 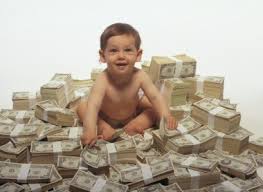 “My kids were taught about personal finances as part of their school curriculum, but it went in one ear and out the other,” said one hard-working client, who called asking for advice on how to teach his teenagers the value of money.

Although the majority of states now mandate some kind of classroom training in finance, most students fail to “get it.” Children learn best when they apply what they’ve learned to their daily life, especially when it concerns their own money. If money is a taboo subject at home (and in most homes it is not), than managing one’s money, no matter how little, simpll becomes a hopeless task.

Yet kids are naturally curious about money. Last year, T Rowe Price, a global financial company, polled parents on the subject and learned that 37% of children asked their parents “how much things cost.” Another 29% asked about an allowance, while 19% wanted to know where money comes from.

The majority of parents (77%) used their children’s allowances as the main tool in family finance education. But there is a lot of controversy over whether kids should work for their allowances, just receive it as part of family environment, or get nothing at all.

Suze Orman, television’s finance guru, believes that the word should not be part of the household vocabulary. Instead, children should be paid for chores. The more chores one does, the more one is paid, depending on the task and the child’s age. This teaches a work ethic, she believes, while negating the allowance as their “due” simply because their best friend receives one.

On the other hand, an allowance for accomplishments above and beyond the expected daily chores (room cleaning, bed-making and other household chores) does help prepare the child for a future in the work place. Simply doling out an allowance to your kid, as many parents do, is no answer, since money never earned is money never valued.

The only way kids learn about savings, budgeting and spending money, in my opinion, is by practicing with money they have earned. But here is where the allowance concept falls down. Of roughly half the children who receive an allowance, in the survey, fully one-third spend it all and come back to their parents for more money. Eighty percent of the families polled in the study gave in to their children’s demands. Is it any wonder that most Americans grow up to constantly live above their means? Even worse, only 1% of children save any money from their allowance, according to the American Institute of CPAs.

Most American families have never addressed sensitive issues like family debt or how much income their parents generated. When asked why that new bike won’t be forthcoming, Mom and Dad simply say “no,” or “we can’t afford it.” That is usually the end of the conversation. In my next column, I will discuss some methods you can use to further your children’s (or grandchildren’s) concept of money, while also teaching them how to budget and save and spend wisely; so stay tuned.