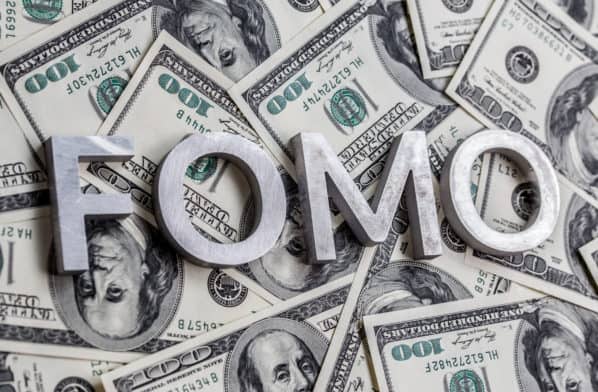 The stock market is frothy.  The great gains that investors experienced last year are extending into this year. As the indexes climb, more and more of those on the sidelines are jumping in. Is this a good sign?

No, it isn’t. “The Fear of Missing Out,” or FOMO is rearing its greedy head on Wall Street. Those who may have raised some cash in the past few months, fearing a trade war, or the impeachment proceedings, have watched the portfolios underperform the averages, ignore all the negative news and climb higher.

On the geopolitical front, we have seen the same thing. Selling on fear of an Iranian response to the killing of one of their heroes was the wrong move and, evidently, so was taking profits on this week’s fears that the China-based coronavirus would spread, denting world economic growth.

Anecdotally, I have been getting requests from some of my tell-tale clients (those who want to buy at the top and sell at the bottom) to buy stocks at historic highs, where their prices exceed all rational measures of valuations. They are usually a good contrary indicator.

As is the US Advisors Sentiment Indicator.  This week’s numbers underscore the gathering bullishness of market participants Those professionals who are positive on the market’s future moved even higher to 59.4%. That is the highest it has been since September 2018.  And as the present rally broadens, we can expect that next week the bulls should top 60%.

In the past, a 60% bullish read would have had most who follow this indicator running for the hills, in the short-term. But so far, the opposite has occurred. Granted, investor sentiment, as a contrary indicator, is not the only variable used in trying to discern the stock market’s next move. I believe that the actions by the Federal Reserve Bank will almost always trump sentiment as a determining factor. So, let’s look at the Fed.

As I have predicted throughout the last several months, as long as the Fed keeps pumping money into the financial markets, I believed stocks would continue to rise. Since the beginning of December, the combined reserve management purchases, plus repo injections by the central bank, has been about $400 billion. The Fed argues that since they have only been purchasing notes (and not bonds with a coupon), their purchases do not qualify as quantitative Easing (QE).  The market doesn’t care. To them QE is QE.

These “Not QE” purchases, however, have been so huge that the central bank is approaching the limit of purchases they can make of these short-dated securities without disrupting the market. At the present rate, there will be no notes left to buy in a month or two. As a result, traders are now betting (75% probability) that by mid-March, the Fed will have to expand their purchases to include longer-dated Treasury bonds.

The logical question to ask is why doesn’t the Fed simply stop these purchases? It could be because the Fed has created its own version of “Frankenstein’s Monster.”  As I have written before, the Fed has dumped such an enormous amount of money into this market that by stepping back from more purchases (no matter how small), the Fed could disrupt the whole market.

The bet is that rather than risk that, the Fed might simply begin to expand its bond purchases to include longer-dated debt maturities with coupons. Of course, once that happens, the Fed would have to admit that, yes, they have embarked on yet another QE program. You might ask, “so what’s wrong with that?”

The first question investors might ask is why? The stock market is assuming that everything is right with their world. Jerome Powell, the Fed’s chairman, has said so over and over again. The President has said so even more times than the Fed. So why do we need another QE program after cutting interest rates three times last year? What’s wrong? The Fed’s actions, far more than anything else, have driven the stock market to its present record highs.  Investors will demand an explanation—and soon.

The second, darker explanation may be that the Fed is no longer the independent body it claims to be. Afterall, Jerome Powell was appointed by the President. The President has voiced his unhappiness with his man’s actions since he got the job. Trump is a staunch believer in easy monetary policy and wants the economy to grow as fast as it can to cement his election chances.

What better way to do that than by getting the Fed to pump money into the system via “Not QE,” since few of us understand something as arcane as the “repo market.” Whereas, cutting interest rates to zero at the president’s request would be an extremely optic moment for all involved. Whatever the answer, the Fed’s future actions should be watched closely.