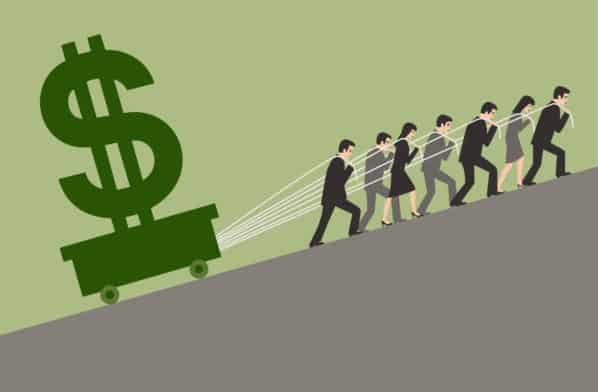 When asked, the members of the Federal Reserve Board continue to argue that the almost $500 million they have pumped into the overnight repurchase market since September is not quantitative easing.  The stock market disagrees.

“Not QE” is the term most often used by the Street in describing this fairly hefty expansion of the central bank’s balance sheet. Because the purchases that the Fed is making are categorized as debt instruments that mature in 12 months or less, they escape the hard and fast definition of what the Fed labels as quantitative easing. QE is the purchase of longer-dated maturities of debt instruments, so the Fed is technically correct.

However, traders are folks who like things simple. Over the past decade or so, when the Fed expanded its balance sheet (bought bonds) the stock market climbed. As far as the Street is concerned, it has happened again starting in September, and so far, there is no end in sight.

There are various explanations (none proven) for exactly why the Fed is making these purchases. Officially, the Fed argues the entire exercise is simply technical in nature. The Fed explained that for various reasons—quarterly tax payments, bonuses, etc.—corporations need more cash to make ends meet, but this trend will soon fade. The problem is they have been saying that for more than four months.

Others worry that some big bank is in trouble, or that this is a new strategy by the central bank to ensure a soft landing in the economy by graduating–over time–from purchasing short dated debt to full-fledged QE purchases of longer majorities somewhere down the road.

I ask myself “what could the Fed be worrying about that the market doesn’t see quite yet?” It is fairly obvious to most economists that the manufacturing sector in this country is in recession. We are also in our third quarter of falling industrial production. The good news is that the manufacturing sector represents less than 8.5% of overall jobs and less than 10% of the economy. So far, none of the woes in that area has spread to the overall economy.

There is a chance that if the downturn in manufacturing persists, it might at some point start to impact consumer spending, which is the locomotive that drives the U.S. economy. However, there is no evidence of that yet. In the meantime, the stock market continues to make record highs. And as long as the Fed keeps the spigot in the “on” position, the stock market’s cup should continue to runneth over.

The signing of the Phase One China trade deal also cheered investors this week. The vast majority of Wall Streeters have not been fooled by the hours-long signing and celebration of the event by the administration. The deal, if one can call it that, is a win for China and not the United States. The fact that the really difficult issues remain and will not be resolved until after the presidential election (if ever) reduces the upside from this event.

About the best that can be said for the deal is that it does reduce tensions somewhat going forward. It also gives the president a chance to claim another success (no matter how lame) among his followers.

The urgent steps we needed to take in response to the coronavirus are largely behind us. Some of the new tactics we employed will disappear (look-don’t-touch shopping), some of them were trends that accelerated (videoconferencing), and there are...
Dalton — I’ve got a theory. And if I am right, the stock market is going to hit a short-term peak right about: NOW! OK, here it is. In response to the coronavirus pandemic, lots of countries are stimulating...
In the weeks ahead, the Center for Disease Control (CDC) wants your children to go back to school. They say it is necessary because children need schooling from a social, emotional, and behavioral health perspective. No one disputes...