“If a tree falls in a forest and no one is around to hear it, does it make a sound?” – George Berkeley

Dalton — A lot of people (well, a lot of people who don’t read Capital Ideas) woke up December 19 thinking that they changed White House locks and kicked out President Trump. Nope. Impeachment is not the act of removing a sitting president, though it is the start of that process. We all know that there is virtually no possibility that the Senate will vote Trump out. A lot of that is easy to understand; you can just look it up on the internet. But I tell you, one thing I can’t figure out is why consumers appear to be so incredibly confident despite the background of this historical outcome. According to the University of Michigan’s Survey of Consumers, President Trump’s impeachment had virtually no impact on our collective confidence levels regarding the overall economy or our expectations, as the index rose to 99.3 in December from 96.8 in November — yet a bit more evidence that my concern of a 2020 recession might get pushed back to 2021.

If the U.S. president is impeached and two days later, consumer sentiment is up, did it even happen? The reality is that it did happen, but it surely doesn’t seem as if many people care that it happened. I’ve been saying that the stock market won’t care, and since it has been hitting new highs, that’s proven to be right. That wasn’t surprising. But I’m still surprised how the average person has just sort of shaken it off. Not that they shouldn’t. Ultimately, it won’t affect us much and it didn’t amount to much more than political theater (I’ll pause for a second while you send me an angry email, the subject being dependent upon which side of the aisle you pin your ideology).

And this is why, in part, the stock market looks vastly different than it did 12 months ago. At this point in December 2018, we were at the nadir of a roughly 20 percent stock market crash. Given that now major stock market averages are up in excess of 20 percent as we close out 2019, investors search their collective memories and wonder about the crash: Did it even happen? I mean, the stock market was down for the entirety of 2018, but not that much: about 7 percent. Year to date, 2019 has more than repented for the sins of 2018. If you ask investors about how good they feel about the stock market, it’s as if 2018 never happened.

That can’t be good for you

In Whoville, they say that as the Grinch looked down upon the Whos singing on Christmas Day, his small heart grew three sizes. Forgetting the health implications of that for a moment, I’m going to try and do the same thing. The cynic in me wants to (and I can’t help but to) point out that, holy moly, the stock market is overbought and is just itching for a correction — or more. Being the contrarian I am, I get nervous when so many people are so enthusiastic. Recent highs in the stock market have elevated bullish sentiment, as measured by the American Association of Individual Investors, to a 44.1% bullish reading, meaningfully higher than its historical average. Periods of excess optimism are often followed by periods of lackluster returns. 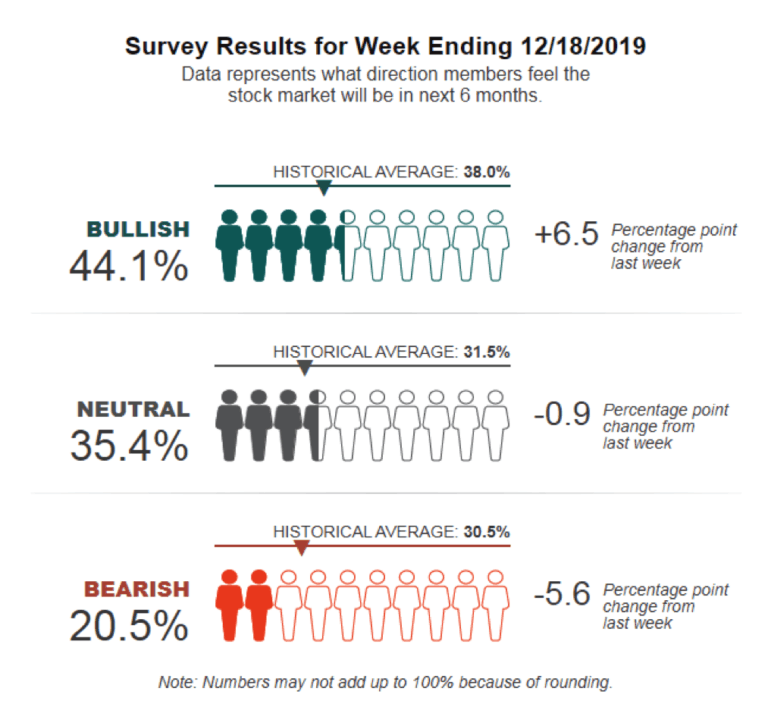 But it’s Christmas in Whoville, and if the Grinch can change, so can I. I can’t blame investors for feeling bullish after the S&P 500 has been up so much from the Oct. 8 lows, achieving a 10 percent return after 50 trading days. Historically, in the 26 previous instances when this has occurred, the three months after have seen negative return four out of 10 times. Though the losses aren’t notoriously huge, the average return is still a positive 1.2 percent over those three months. Here is my Christmas, Chanukah, Kwanzaa, Festivus, and pagan present to you: 12 months after the S&P 500 has been up 10 percent in 50 days, on average, it has been up another 9.1 percent with positive returns more than three-quarters of the time. History tells us that the next few months might be disappointing, but the patient investor could be rewarded.

Based on current allocations for myself and for my growth-oriented clients, I’m going into 2020 fully invested. Unless something dramatic happens in the next week, the S&P 500 will have gained over 20 percent in 2019. I’ve heard investors fret that such big gains this year may take away from gains next year. The evidence suggested otherwise. Calendar years in which the S&P 500 gained more than 20 percent were followed, on average, by calendar year gains of 6.58 percent, slightly below the average return of 7.59 percent in all other years since 1928. (The size of the return in the first year had no predictive power over what happened in the next year.)

Maybe an average-ish return, to you, is like getting gym socks in your stocking. But it’s better than losing your shirt.

Eh, that’s kind of a wimpy little gift. I essentially said, “Things will probably be lousy for a little bit, but hang in there.” For the nerds, let me see if I can’t stuff something more substantial in your stocking. First, a clarification in the form of an acknowledgement: I’m giving you the gift of reasons why the stock market will have a good 2020. Common caveats aside (such as corrections happen, and it’s stupid to measure a return between two arbitrary dates), I remain nervous about the potential of a big move downward for the stock market. I’ve held onto that concern given my interpretation of the collected fundamental data. But to paraphrase John Maynard Keynes, when the information changes, I change my mind. What do you do? The information is getting better due to an extremely accommodative Federal Reserve Bank and seemingly good progress in U.S.-China trade relations.

In some ways, fundamentals only serve to provide a narrative that supports the important technical data that tell the real stories: the stories that are not in the headlines. This week the percentage of operating company stocks (listed securities of companies that do business, as opposed to structured products or bond proxies) within 5 percent and 10 percent of 52-week highs exceeded their August 2018 peaks and rose to their highest levels since January 2018 (both months saw tops in the market). This is a measure of breadth; a healthy market has a lot of support from its participants, and breadth is as good now as it was then.

That’s not necessarily comforting news by itself, because the stock market didn’t meaningfully break out to the upside until about six months ago. There was a lot of treading water and that Christmas crash. As we continue to remind you, “good” or “bad” news matters much less than “better” or “worse.” However, this time, we have the advantage of the trend being on the side of the bulls. In contrast to the August 2018 highs, when these figures were flat for two months prior, today, these measures are in steady uptrends. In other words, things are getting better.

Just as important as having a lot of stocks currently participating on the upside, there is little evidence of internal market weakness. I’ll spare you that confusing math and simply share that the percentage of operating company stocks that are trading 30 percent or below 52-week highs is in a 12-month downtrend. In other words, again, things are getting better.

That doesn’t mean we can’t get corrections, and big ones at that, but it does mean that it’s unlikely we’ve reached the end of this decade-long bull market just yet.

This article originally appeared in The Berkshire Edge on December 25, 2019