What a week of volatility! The Dow was up or down one hundred points or more every day while the other averages were equally as volatile. Brace yourself, because October should be just as crazy. 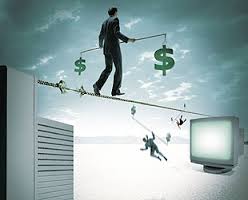 Pick your poison:–the presidential debate, fears of a global banking crisis, a spike in oil—all of them provided a field day for short-term traders. Of course to profit, one must have known who would win the debate, that OPEC would come to a tentative agreement to cut production, and that the largest bank in Germany would experience even more financial difficulties.

I wrote last week that politics would impact the markets this month. The first presidential debate saw the market drop double-digits on Monday, only to recoup its losses on Tuesday, as the market determined that Clinton had won the debate. How they determined that was less important than the money that was made believing it.

OPEC also met this week in Geneva. The betting was that the members would not (or could not) come to an agreement. Traders expected that the oil price would crater once the meeting ended in disappointment—wrong! Oil shot up in price over 5% as OPEC members agreed to work out a production cut among its membership before their next meeting in November.

The news caught quite a few day traders and proprietary trading desks of big financial concerns flat-footed. As the smoke cleared, stocks rose even higher following the gains in oil.

Just a few hours later, Bloomberg News reported that several nervous hedge funds were pulling their money out of Deutsche Bank, Europe’s largest financial institution. The bank’s stock price has been dropping steadily, (down over 50%) on concerns that Europe’s negative interest rates were decimating the bank’s business.

Suddenly, memories of the collapse of Lehman Brothers, which precipitated the 2008 Financial Crisis, roiled the markets. All three U.S. indexes dropped in a panic led by financial stocks.

By Friday, some common sense returned to the markets. The economic and subsequent financial crisis of 2010-2013 shook Europe to its core. In response, the EU and the ECB established a series of safe guards among its banks to prevent a repeat of this kind of crisis.

As a result, even if Germany’s largest lender is truly in dire straits, there are certain financial requirements that every European bank must adhere to. In this case, Deutsche bank has about $264 billion in liquidity reserves. The bank also has enough liquid reserves to cover 120% of the bank’s obligations for the next 30 days, no matter how severe the stress.

There have also been wild rumors of a bank bail-out, plus a half-dozen more stories that cannot be substantiated. They do, however, make for some lucrative trading opportunities by high frequency traders. Don’t get sucked into this drama.

My own opinion is that financial stocks around the world were already selling at bargain basement valuations. This scare makes them even more attractive, if you are willing to hold them long enough. Remember, too, it is also the last week of the month and the last day of the quarter, when a lot of funny business usually occurs (it’s called window-dressing).

October is upon us and the next election debate is on October 9th.  Batten down the hatches and prepare for the worst. That way, when things go better than expected, you will be pleasantly surprised. As for me, I will be temporarily out of commission for the next few weeks. I am getting a left knee replacement, but should be back in action before the election. In the meantime, do nothing until you hear from me.