Child labor has been given a bad rap around the world and deservedly so. However, all child labor isn’t necessarily bad. I for one have benefited greatly from my youthful work experiences and I bet you have too. 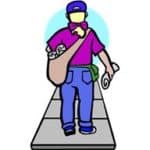 The words “child labor” evokes visions in our minds of wretched children working in filthy factories or dangerous coal mines with little to eat and even less compensation. The universally accepted definition of child labor is the “employment of children in regular and sustained labor.” Most countries ban that kind of child labor, but what about other forms of labor?

I had my first paper route at 11 years old. By the following year I was also delivering Sunday papers, waking up at 4AM and working until noon. By my 14th birthday I was working at Duff’s, my neighborhood drug store in Philadelphia, serving soda and making change for the neighborhood after school. During the summers, I worked even harder: cutting lawns, bagging in supermarkets and even hauling hot roofing tar up two stories on occasion. I always had money, was rarely bored, made okay grades in school and received a fabulous education that I could have never obtained in school.

In the U.S., you can legally get a job at 14 as long as you work no more than three hours a day (18 hours a week during the school year or past 7:00 PM). Youths of any age can deliver newspapers, perform in radio, television, movie or theatrical productions; and babysit or perform other minor duties around a private home. In the agricultural sector, kids can work as young as 12 years old during non-school periods. But by the age of 16, America’s youth can work without restrictions or parent’s consent.

In this country there is a long tradition of kids like me, dating back to the last century. The jobs of our youth often teach us skills that are with us our whole lives. Some of the things I learned were simple things like filling out applications and more complicated skills like interviewing, working responsibly and how to get along with co-workers and, of course, the boss. Since my father started his underage work life in the coal mines near Altoona, PA (until he was trapped in a cave-in), my early working career seemed comparatively easy.

My daughter, Jackie, followed in the family footsteps, first as a snowboard instructor at 13 years old (almost 14). She was the snowboard director by the age of 17 managing almost 50 instructors on the weekends at a local ski slope. She credits her early work experience for giving her confidence and independence, a MVP status among her high school peers and a developed sense of responsibility that continues to this day as a new mother and as an executive at a international public relations company.

Like me, her work life kept her on the straight and narrow in school, away from parties, drugs and poor grades.  She also learned the meaning of money and had enough income to pay for her own auto insurance when she learned to drive.

Now, granted, this is all anecdotal evidence. Research indicates that those teenagers who work more than 10 to 15 hours a week do receive lower grades. Many also sacrifice extracurricular activities and friendships they would have otherwise made if they weren’t working as hard.

Some teens, their pockets flush with cash, have the means to experiment with drugs and alcohol, which many obtain from older co-workers. Finally, there are many cases where overworked teens spend a lot less time with their families, eating and exercising less than those kids without onerous work schedules.

Many teens first job are in the retail sector such as fast food outlets, restaurants and grocery stores. Often these entry level jobs are routine, boring and lack positive interaction with adults. It can be tough on a young person, and that’s where you can add value as a parent. Encouragement, a sympathetic ear and a little compassion can go along way to help your child through that first rough year or so.

I also advise you to monitor your child’s progress. Don’t simply take “okay” as an answer for how work is going. And if you don’t like the thought of after school work for your teenager, summer employment is an excellent alternative.

If for some reason your kid doesn’t need to earn money, there are always non-profit alternatives to choose from, like selling girl scout cookies or fundraising for the Boy Scouts of America or any number of charitable organizations desperate for additional help.

The point is that child labor, American-style, is a major positive in my opinion as long as it is accomplished within the guidelines above.