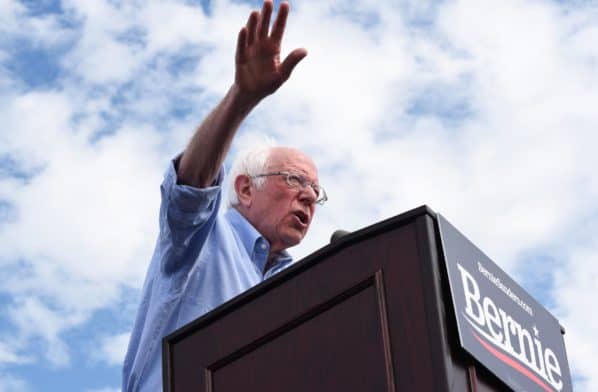 On the eve of yet another Democratic primary, the policies and promises of the front runner, Bernie Sanders, haves suddenly come into focus for many voters. The price tag of his platform could be enormous–as much as $60 trillion. Are these promises just waiting to be broken?

Last week, I focused on the promises Donald Trump has made and his track record on fulfilling them. He gets at least a “B,” although things like his infrastructure projects and restoring manufacturing were big failures.

In Bernie’s case, as a big picture guy, he is arguing for a new vision of America’s future. His platform lists seven major spending programs (and a bunch of little ones). The price tag for a Green New Deal, universal pre-kindergarten and childcare, tuition-free public colleges and universities and public housing, is estimated to cost about $23 trillion. Universal health care would add anywhere from $22 to $34 trillion.

In addition, a proposal to increase Social Security benefits, an infrastructure program, a federally guaranteed jobs program, etc. could boost that total by several trillion dollars more. This money would be spent over a decade and would fundamentally change the direction and vision of our society.

Bernie’s program would double the amount of government spending throughout the next decade and would increase the share of federal spending by 20%. It would make Delano D. Roosevelt’s New Deal look like peanuts, since the price tag of Roosevelt’s efforts increased federal spending as a share of Gross Domestic Product by a mere 8%.

Of course, in the midst of partisan politics, the actual cost of these ideas could be far higher (or lower). How does Bernie intend to pay for it? Sanders has said that $30 trillion in new taxes would come from businesses and the rich.  Another $12 trillion from revenue and savings, and a $1.2 trillion cut in defense spending.  He also argues that $6.4 trillion would be generated from earnings from his Green Deal program.

The Director of the Progressive Policy Institute’s Center for Funding, Ben Ritz, concluded that Sanders’ numbers would only generate about $29 trillion in taxes and revenues. That would still leave a big short fall and would need to be made up by either borrowing or by taxing the middle class. To put that into perspective, the entire personal income tax over ten years would amount to the same amount of money. So, what about borrowing the money?”

Both bond investors and more and more economists are concluding that raising the money in the debt markets is entirely doable. In fact, it has never been cheaper for the U.S. government to borrow money. U.S. treasuries this week hit an all-time low with as little as 1.25% on the benchmark 10-year bond. It appears that this trend is here to stay for at least the next few years.

For the last 40 years, interest rates have been in a broad decline, while the national debt has moved in the opposite direction. There was a time when Republicans were supposedly the watch dogs of the budget deficit and government spending, but that is no longer the case. Under Donald Trump, the GOP spends more money than a drunken sailor and no one cares. Democrats don’t seem to care either. Deficits have grown and are approaching 5% of GDP and federal debt owned by the public is above 80% of GDP this year.

It seems from this perspective that Bernie Sanders’ programs could be accomplished simply by issuing U.S. Treasury 100-year bonds every year for the next decade. Of course, Sanders’ knows this as well as anyone, but chooses (because the optics are better) to argue he can finance his program by a platform of taxes and revenues. That is nothing new. Every politician in modern history promised the same thing.

The question one must ask is not whether it is affordable, because most Americans tend to live above their means and have no problem going into debt to accomplish that, but whether or not you embrace Sanders’ vision of America’s future. It is not a question of Socialism. That horse has left the barn. Corporate Socialism is the reality of our everyday lives, in my opinion. It is simply a question of what kind of socialism you want to embrace, his or Trump’s.