Day after day the markets climb higher. Recession in Europe, worries over China’s growth, even the skyrocketing price of oil have no power over these markets. The bears are in full retreat and only sunny skies are allowed on Wall Street. 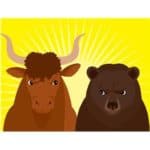 Despite an increasing number of predictions that the market has run too far, that stocks are heading for a correction, investors still use any minor dip in the markets as an opportunity to get in. On Friday we touched 12-month highs on the S&P 500 Index while the Dow flirted with the 13,000 mark for most of the week.

It seems to me that it is time for a little profit-taking, if you haven’t already. My suggestion would be to pare back on your most aggressive equity holdings and keep the proceeds in cash for now. I know that money markets are yielding next to nothing but I don’t expect your cash to sit there for long. Any correction should be short-lived and if it isn’t, well, you could always put the money into something higher yielding if necessary.

There are plenty of signs that the averages are “crusin for a brusin” from the dissipation of volume, the continued decline in the market’s breadth, to the fact that markets usually have trouble when they approach certain technical areas of resistance (like now).

Fundamentally, the rise in oil prices is a real threat to the markets. I outlined the causes for oil’s rise in this week’s column (“Gas Prices Going Higher”). At $109/bbl for West Texas Crude and gasoline above $3.60/gallon nationally, consumers are starting to feel the pressure. The higher energy prices climb, the worse the impact on economic growth. Although investors are aware of this threat, most are assuming that sometime soon (when speculators least expect it), the Commodity Mercantile Exchange (CME) will announce an increase in margin requirements.

The same thing happened last year when oil prices rose above $112/bbl. Speculators, forced to pay much more for their short-term futures holdings in oil, gasoline and heating oil, dumped their positions, sending energy prices plummeting over night. At some point soon, something must give: either oil prices or the stock markets.

Now that Greece has largely faded from the headlines, Europe faces the aftermath of two years of a festering debt crisis. The European Union overall is now in recession with the Southern European nations suffering the worst. Most nations now face the need to reduce their deficits and are doing so with a combination of reduced government spending and increased taxes.

In Europe, it is much easier to raise taxes than reduce spending thanks to the politically difficult nature of laying off government workers or cutting back on their pensions and benefits. Of course, raising taxes and cutting spending while an economy is in recession is exactly what happened in this country in 1933, and we all know how that ended. Maybe this time will be different, but I’m not counting on that.

As I wrote last fall, the problems in Europe were blinding investors to the positive news coming out of our own economy. By October it had become obvious to me that our stock market did not adequately reflect the stronger growth in the U.S. As predicted, investors have finally realized the truth and prices now reflect the facts, so its time to take some profits.