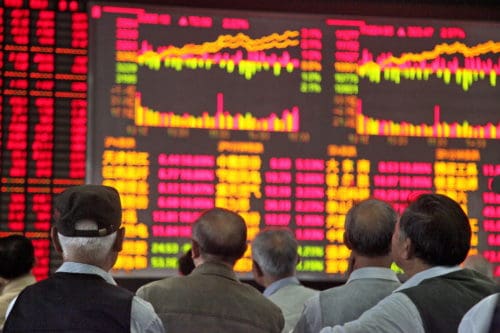 October is certainly living up to its reputation. This week, we witnessed a more than 1,000-point decline in the Dow Jones Industrial Average before recovering at the end of the week. Behind the volatility: worry over a slowing economy.

On Thursday morning (October 3,2019), the Institute for Supply Management (ISM) announced that the non-manufacturing index hit a three-year low. This was on the heels of earlier negative news from the manufacturing sector. The Institute said that sector had experienced its worst contraction since 2009 with the index falling to 47.8% from 49.1% in September.

Economists and traders alike already knew that manufacturing was in a recession as a result of the global slow-down brought on by the U.S. trade war. They were hoping that the weakness in manufacturing would be contained and not spill over into the overall economy. Thursday’s data shot a hole into that theory.

Consumer spending, as readers are aware, is the end-all, be-all to the U.S. economy. Therefore, any weakness in the economy, investors fear, could translate into job cuts, lower or static wages, and a subsequent drop in consumer spending.   This would deep-six the economy. And the consumer can change sentiment on a dime. If the consumer lacks confidence in the future, an economy can go from moderate growth to near recession in a couple of months.

As such, all eyes were on Friday’s non-farm payroll report. Economists were expecting job gains of 147,000. Instead, jobs totaled 136,000, while the official unemployment rate (only politicians and the uninformed care about) dropped to 3.5%, which was the lowest rate in 50 years.

Although the job gains were a somewhat disappointing shortfall in expectations, it was the average hourly earnings that Wall Street focused upon. They came in little changed from last month at 0.4%–better than many feared. With a collective sigh of relief, the markets rallied, recouping much of the damage wrought in the beginning of the week.

However, all is not as it seems. Much of the job gains were fueled by government jobs and not the private sector. While the strike by GM workers influenced the numbers, it appears that there is less enthusiasm in hiring among U.S. corporations.

Clearly, there has been a down-shift in job growth this year but given the string of employment gains that date back to 2011, a fall-off in growth is to be expected. The trick will be to continue to grow the economy enough to fuel continued wage gains (and therefore consumer spending) but not too much, or we could trigger an uptick in inflation.

It is why I think the President’s demands that the Federal Reserve Bank cut interest rates a full percentage point would be an unmitigated disaster. Far better that he focus on getting a trade deal with China. If that were to happen shortly, a huge weight would fall off the global economy, which would likely fuel growth both here and abroad, and make further interest rate cuts unnecessary.

As it stands, the two nations resume high-level trade talks next week in Washington. Two weeks later, the Fed meets again. The recent negative economic data has brought forward the market’s hopes and expectations that the Fed may cut interest rates again by 25 basis points at the end of the month (instead of waiting until December).

I warned readers that October would be volatile. This first week has been a doozy! I also forecasted that we would be trapped in a trading range until an outcome on the trade deal becomes apparent. If Trump continues to stall, or ups the ante on tariffs, or worse, breaks off talks again in another temper tantrum, the outcome would be fairly predictable. It would be an October to remember.

If, on the other hand, Trump believes he needs a “win” to counter the slowing economy and the impeachment inquiry, then even a half-hearted deal might be in the cards. In which case, we could see a 10-15% move higher in the averages. Don’t you just love politics!

Bundling up on Black Friday to shop for great deals on TVs, iPods, and holiday gifts while still full of Turkey and stuffing is a thing of the past. While our bellies have remained stuffed, our Black Fridays...
Are financial questions keeping you up at night? Financial Advisors Holly Simeone, CES™ and Lauren Russo, CEPA, FPQP™, CVB, together with Paraplanner Angela Elzner, FPQP™, invite you to invest in your financial health by joining them during Open...
This special series of blog posts spotlights the individual team members who make Berkshire Money Management great – and a great place to work, too. Today we’re celebrating Financial Advisor Nate Tomkiewicz, CRPC® as he marks six years...