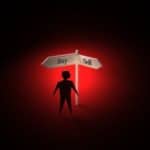 It’s called a “snap-back rally”, something that occurs when the markets are extremely oversold and have experienced a straight down plunge that gives no quarter to investors trapped in the market. Sometimes these rallies can be quite powerful and are usually sharp and fast. They are temporary and are usually followed by a re-test of the lows and sometimes break lower.

However, a truly “tradable” bottom is an altogether different animal.

“”What do I look for?” asked a reader last week.

One area to watch is the options market. This is the arena where speculators place bets on whether a security or market will drop further (or move higher). In this case, I’m looking at the put options on the S&P 500 Index. On Thursday put buyers were practically in a panic to buy put options on the S&P. Over one million contracts changed hands, which represents 2 ½ times the average daily volume for these contracts.

The last four times this has occurred (February, June, August and November, 2011) the markets were close to an important bottom. But this is only one variable. Some other signs include the following:

The talking heads on television will stop promising a “near-term” bottom. Instead, they will throw in the towel and start advising viewers to sell everything because there will never be a bottom.

Those pundits who are continuously cheerleaders for the markets called Perma-bulls will begin to back step, vacillate and some might even go bearish while the loudest and most obnoxious Perma-bears will announce that they are “shorter than ever before and you should do the same.”

Start listening to the radio on the drive to work. It is a good sign when broadcasters start leading off with the latest bad news of the market.

Rumors of hedge funds in trouble, big margin calls and the like are another sign we are closing in on a bottom

My clients will call in a panic demanding I sell a stock or mutual fund that up until now I could not convince them to part with at any cost (think “A”). The conversation usually begins with “Oh my God” or “Did you see that?” and ends with “sell everything.”

Finally, most bottoms are accompanied by a “flush” where selling volume explodes and prices drop as if they are on an express elevator.

All of the above, plus a couple more factors come into play when I am looking for a tradable bottom. Yet, I must admit that it really comes down to a feeling that one develops after many years of watching markets and experiencing nasty down turns and glorious rallies. It is why managing money and investing in markets will always be an “art” and never a science.

I couldn’t close without mentioning a worldwide social networking phenomenon that went public on Friday. The build-up to this initial public offering reminded me of the “John Carter” movie trailers that I was forced to watch every time I turned on the television, and its debut appears to be as much of a disappointment as the man on Mars. When I look back through history at other hyped up IPOs that were touted as the greatest thing since Moses parted the Red Sea, I discovered that most of the future upside in these stocks was priced in by the close of the first trading day. On average, the price of these stocks was down from the offering price six months later.