Brace yourself for a crowded holiday weekend. This year the kick-off to the summer season will see 37.2 million Americans take to the roads. It will be the strongest volume in travel in over a decade. And the summer is only beginning. 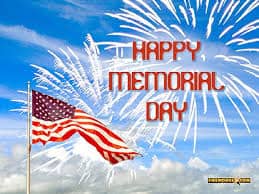 The joyful combination of low gasoline prices and a stronger economy is expected to improve the economic health of sectors ranging from hotels to autos to summer jobs for teenagers. After a dismal winter, this rebound should allow the economy to bounce back and then some.

Memorial Day weekend, for example, is typically one of the four best times each year to purchase an automobile (with tax season, Labor Day weekend and the end of the year the remaining three). That’s because shoppers have been hibernating all winter and are heading outside to take advantage of spring deals. The three day weekend also gives potential buyers an extra day to shop. And it’s the end of the month when car salesmen are trying to hit their monthly bonus targets. This, some think, makes salesmen more willing to make a deal and earn a big bonus check.

This year, many manufacturers are sweetening the pot even further by adding cash allowances on top of special financing while many dealerships are offering a special bonus to those who make the most sales over the long weekend. Together with low gas prices, this combination has enticed Americans to pay up for luxury cars, extras and sport-utility vehicles. That’s good news for the automakers since those models are far more profitable for the industry than simple passenger cars.

Consumer confidence is also at record highs, thanks to lower fuel savings and an improved job market. Those factors are giving families more disposable income heading into the summer. That’s good news for the hotel and tourist industry as consumers are expected to head to the beach or to other vacation destinations in record numbers.

This year too, many more Americans will be travelling overseas, thanks to the 12-month climb in the U.S. dollar. The currency effect has made overseas destinations affordable, making the cost of foreign vacations the cheapest in over a decade. Not only has there been an increase in the number of Americans travelling, but their length of stay has also risen.

Europe, especially, has seen a healthy uptick in bookings largely due to the steep fall in the Euro, the currency of the European Union. As an example, a typical hotel cost for a week’s stay in Vienna is cheaper than a comparable room at the same hotel in Dallas.

There is also some good news for kids looking for a job over summer break. The results of a summer hiring survey of 1,000 employers, by Snagajob, an employment website, indicates that 78% of those polled expect to hire the same, or more, hourly workers this summer compared to last year.

Another outplacement consultancy firm, Challenger, Gray & Christmas, said employment demand for those between the ages of 16 and 19 years old is currently at its highest level since 2009. What’s more, overall hourly wages are expected to increase to an average of $11.52 this summer, compared to $10.39 last year. That appears to prove wrong all those doom and gloomers who were predicting this year’s increases in the minimum wage would decimate job growth, especially among women and the young.

All in all, it looks like this weekend will launch a fairly healthy summer for Main Street while Wall Street goes on vacation. By the time traders return after Labor Day, the results of this summer could add a boost to the stock market as well. Now that’s a nice prospect. Enjoy your holiday, America.