The headlines paint a stark portrait of the amount of goods and services that American workers produce in any given year. We are in the longest decline of American productivity since the 1970s. That fact has economists pessimistic about the future chance of continued growth in this country. 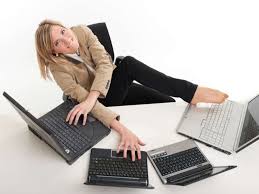 Labor productivity has declined for nine straight months and fallen 0.4% over the last year. There is nothing complex about productivity statistics. Output per worker, according to the numbers, is drifting down when it should be going up. The last time this happened was in the 1970s, just before a nasty double-dip recession.

Increases in productivity are what makes America’s middle-class what it is. Living standards improve when productivity climbs because the economy produces more goods and services with less. As a result, workers get raises, corporations add higher-paying jobs and you and I feel like we are making headway in our careers.

Contrary to what you might think, a decline in productivity does not mean that American workers are getting lazy or becoming inept in the work force. Much of productivity depends on innovation. If a worker is using a fifty-year old tool or a 25-year old computer to produce a product, the chances are productivity is falling no matter how long or hard she is working.

Since WW II (up until 2005) annual productivity gains averaged 2.3%. New, more efficient methods of producing bigger and better products and services developed during the war effort and were carried over into civilian society allowing productivity to roar. The advent of the computer especially in the 1990s goosed productivity even further and helped carry us through the post-war decades. Since then, the rate has gradually declined only averaging 1.2% or so since 2006 despite the ‘digital revolution.’

You would think that these new digital innovations would have further aided productivity. After all, the internet and the development of things like emails and messaging should have made the workplace more efficient. Maybe it did provide some growth, but if so, its life cycle might have been shorter than we thought. It could be that mobile devices, networking applications and teleconferencing will provide a productivity life in the future. It is just that we are now in a lull between phases.

Some economists believe that the Baby Boomers are at fault. As experienced workers leave the labor force for retirement and are replaced by millennials with little or no experience, productivity falters even though employment overall is picking up. However, lower productivity seems to be a global phenomenon and not all countries are expereincing the Baby Boomer demographic.

A better explanation may be the lack of capital investment in this country since the financial crisis. Although corporations are flush with cash, they have been using that money to pay larger dividends or buy back their stock in the markets. Companies argue that regulations, taxes and unskilled American workers are at fault for their lack of capital spending. Falling world-wide wages may be another reason. Investing in technology and experimenting with better ways to produce a widget are expensive. Given the trend toward lower wages worldwide, it may be cheaper for companies to simply hire more workers at minimum wage and make-do with antiquated equipment or practices or move off-shore where wages are even less.

Reversing this trend may take a combination of factors. As unemployment drops and labor becomes scarce, companies will have to pay up for skilled workers. At some point it may become economical once again to spend on plant and equipment rather than continue to pay and hire at higher and higher wages.

Then too, after the presidential elections, some of Corporate America’s complaints over taxes and regulations may be addressed by both political parties. At least, we can hope so since, without investment, innovation stalls and with it productivity.

Clearly, the decline in productivity has been and continues to be one of the major drags on retuning America to its historical growth rates. Without gains in productivity, living standards flatten out and things feel like they are going backwards. Until we solve it, middle-class workers in America will continue to struggle.