The Establishment–Economists, politicians of both parties, Wall Street and Corporate America–are horrified. One of the lynch pins of capitalism has suddenly come under attack. The growing anger over free trade is threatening more than 30 years of trade deals with the rest of the world. It was a disaster waiting to happen and we have only ourselves to blame. 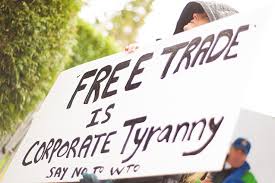 Theoretically, free trade benefits everyone. These benefits include comparative advantage, which allows companies that can produce certain goods and services cheaply and efficiently. This will provide consumers with lower priced goods, increase exports globally, allow economies of scale among industries and nations and create a greater choice of goods for everyone worldwide. So what’s the problem?

If you ask proponents of free trade about these benefits, they are quick to point out while free trade creates jobs, those getting these new jobs are different from those who lose them. In addition, there will always be winners and losers in trade deals. Unfortunately, those who lose feel the loss almost immediately and the losses are quite specific. Identifying those who win, on the other hand, usually takes far longer and the benefits are diffuse and sometimes quite nebulous.

As such, free trade is a contentious issue in just about every presidential election in the last thirty years. The passage of the North Atlantic Free Trade Agreement (NAFTA) back in the early Nineties was controversial, to say the least. Today, older Americans in the “rust belt” (in states like Ohio and Indiana) are convinced that NAFTA decimated the working class in their region and manufacturing in general in this country.

They have a point. It is true that in 1980, for example, a full 20% of Americans worked in manufacturing and now that figure has shrunk to only one American in twelve holding a manufacturing job. Whether those jobs were lost by NAFTA and other trade deals or because technological innovation reduced the need for a human labor force is the subject of unending debates. I suspect that a lot of both variables were at work in our manufacturing sector.

Clearly, over three million manufacturing jobs were lost to China, thanks to China’s inclusion into the World Trade Organization in 2001. Their membership required the U.S. to lower tariffs on Chinese goods and manufacturing in America has never been the same. Is it any wonder, therefore, that both Bernie Sanders and Donald Trump in their opposition to trade agreements of the past are seen as champions of the people?

Jobs, wages, and economic insecurity, amid the highest income inequality in the nation since its founding, are issues that have been brewing in this country for years. Voters simply need a rallying cry and someone to voice it. Trump, Sanders and free trade were accidents waiting to happen.

For years, politicians of both parties promised help but delivered the opposite. Both President Obama and Hillary Clinton promised eight years ago to withdraw from NAFTA in order to force Mexico to renegotiate the agreement. Hillary also promised a “time-out” on any new trade agreements. Yet, Obama went on to not only break his promise on NAFTA, but then pushed to win approval of three Bush-Era free trade deals. He then negotiated the Trans-Pacific Partnership (TPP), the biggest trade deal in American history.

Clinton, as President Obama’s Secretary of State, conveniently forgot her NAFTA pledge as well while supporting the administration’s TPP deal—up until recently. Thanks to Sanders’ and Trump’s opposition to past free trade deals, Clinton has made an about face as she tries to convince Rust-Belt voters that she too is against the Trans-Pacific Partnership. Republicans, for their part, have intimated the majority of free trade deals in modern history and have ideologically used free trade as one of the pillars of GOP-style capitalism.

Unfortunately, for the Establishment candidates, the electorate has wised up to their “promise them anything, but deliver them nothing” approach to politics. The voters are intimately aware that free trade deals have benefited Corporate America (with fatter profit margins and lower wages), Wall Street (by investing in these same companies) and Capitol Hill, which benefits even more from the hefty contributions to campaign chests and jobs by grateful constituents once they leave office.

Labor and small business have suffered the most. This is not surprising, given the demise of labor unions in this country. Labor has never been offered a seat at the table in these trade deals, nor will they, as long as the Establishment holds power. Is it any wonder that labor in this country casts a jaundiced eye toward free trade? Why should they believe those who promise future benefits that after three decades of trade deals have still not materialized for these victims of “free trade?”

Dalton — Last week I was not able to write a Capital Ideas column because I was getting in what will likely be my last bit of work travel for a while. A lot has happened since I’ve been...
Now that Congress and the Federal Reserve Bank have fired the first salvo of relief spending, investors are wondering how long the trillions of dollars in aid will take to actually do something to alleviate some of the...
It was another week for the history books. Stocks gained almost 20% in four days. Employment dropped the most in history. The number of cases of the COVID-19 virus in America topped those of China. And President Trump...