Everyone seems to be looking for the same thing, an end to the pain, an end to the stress, a place where the selling stops. It’s called a bottom and it appears to me that we haven’t found one yet. 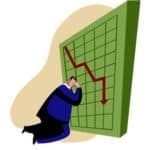 One contrary indicator is the sheer number of bottom fishers that are trying to outguess each other on how low the markets can go. Normally bottoms are reached when no one wants to buy and everyone believes the markets are never, ever coming back. So far, I have seen no evidence that investors are in that state of mind.

This has been a waterfall decline and as such, one can look back through history and see how markets have reacted to past selloffs of this type. If you haven’t read my August 11th column, “What to expect from after a waterfall decline” please go to my blog listed at the end of this column and be sure to read it.

Over the last two weeks the market declined to about 1,100 on the S&P 500 Index and then proceeded to bounce 9.5% to about 1,204. Many think that was the bottom. But was it? I looked at some historical data on past waterfall declines, compliments of Ned Davis Research, a highly respected financial firm, hoping to confirm or deny that supposition.

I found that in 8 of 11 post-waterfall decline cases since 1929, the market has made lower lows. So far this decline has been a textbook waterfall decline. They all  begin with a breath-taking whoosh downward, find an interim bottom, (in this case S&P 1,100) and proceed to bounce about 10% to an interim peak. Our rally this week to 1,204 was about 9.5% and would certainly seem to qualify as an interim peak.

Now that does not mean that this decline must replicate past performances. And remember too that this type of bottom occurred in73% of the cases since 1929. Therefore, 2011 could turn out differently. My intention is neither to frighten readers nor to call the bottom but rather to give you an idea of what has happened in the past and give you a framework for future risk/reward. At the very least, I would think that there is sufficient historical data to reframe from jumping into the market again at some arbitrary number whether it be 1,100, 1,075 or 1,020.

Bottoms are rarely “V” shaped. There is usually a basing period of several months where the markets trade up and down, testing the lows until a sufficient amount of evidence convinces investors to get back in the market. The sectors that perform the best in a basing/testing period are health care, energy, consumer staples telecom and utilities. Once the market bottom is in, then the sectors with higher betas such a s technology, consumer discretionary, financials and industrials outperform.