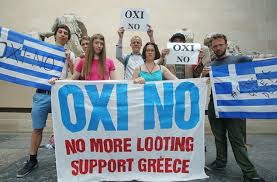 A Greek referendum less than two weeks ago delivered a resounding “no” when voters were asked to approve the European Community’s austerity ultimatum in exchange for a new bailout. While Grecians danced in the streets, global markets tumbled, but fast forward ten days and we now face an entirely different set of outcomes.

Today the Greek parliament approved an austerity program much tougher than the one they originally rejected in the referendum vote. It was approved by 229 votes out of the 300-seat chamber. In a showdown with the EU, it was either pass the package or get booted out of the Euro.

You may need a little background in order to understand this about face by the Greeks. Greek Prime Minister Alexis Tsipras has spent the last six months deliberately stalling while negotiating in bad faith with the “Troika” (the IMF, EU and ECB). When it appeared that the other side was getting close to agreeing on some of his demands, Tsipras walked out while calling for a referendum. That deliberate act of sabotage was supposed to force the Troika to agree to even more concessions on the back of a “no” vote. Instead, it did just the opposite.

Tsipras’ theatrics convinced the Troika that they were dealing with damaged goods and that the era of conciliation was over when it came to dealing with Greece and its problems. There would be no more emergency money. Greek banks would remain closed as would the stock market. If default and an exit from the Euro were the outcome, so be it.

Germany’s Finance Minister, Wolfgang Schauble, who had become increasingly cynical of the on-again, off-again, negotiating tactics of the Greeks, floated an idea in last weekend’s emergency session of the EU in Brussels that would kick Greece out of the Euro in what he called a “five-year time out.”  Although not all EU members agreed with the idea, enough did. The statement signaled that Germany had had enough. Either Greece was going to toe the line or it was going to experience a financial and economic meltdown.

Tsipras was given until the middle of this week to convince his nation’s parliament to pass a series of austerity measures that went beyond those already rejected in the referendum vote. Some of these changes include rules and regulations that would make it easier to fire employees, the end of some protectionist measures that would open up multiple markets including pharmaceuticals and diary products, as well as the creation of a privatization fund whose proceeds would be earmarked to pay down debt.

In order to comply, Tsipras found himself in the unenviable position of enlisting the aid of the opposition parties while fighting his own hardline supporters in the Syriza party. In the meantime, a confused and disillusioned populace wonders how and why their leaders have sold them down the river. It would appear that even though the beleaguered Prime Minster was successful in this latest turnabout, his days as a leader are numbered. The EU has already cast their verdict, Tsipras cannot be trusted. His own party will likely call for new snap elections and a no confidence vote regardless of the outcome of this austerity deal.

In hindsight, the flawed tactics of Tsipras and his newly-elected, left-wing Syriza party were typical of a group of amateurs trying to play Game of Thrones with the likes of Germany’s Angela Merkel and Christine lagarde, director of the IMF. Unfortunately, the entire charade has left the leading actors somewhat tarnished as a result. Germany and the other members of the EU, an organization founded on the principals of democracy, harmony and peaceful unification have just engineered “one of the most brutal diplomatic de-marches in the history of the European Union” as a front-page story of the Wall Street Journal described it.

Greece is left with an economy at a standstill, an exploding debt load with no real way to pay its creditors and a population, already drowning in austerity measures, facing even worse. Do I think that the worst is over for Greece and the EU, not by a long shot?

Bill Schmick is registered as an investment advisor representative with Berkshire Money Management. Bill’s forecasts and opinions are purely his own. None of the information presented here should be construed as an endorsement of BMM or a solicitation to become a client of BMM. Direct inquires to Bill at 1-888-232-6072 (toll free) or e-mail him at email hidden; JavaScript is required