Now that the country has avoided the Fiscal Cliff, everyone is breathing a sigh of relief. However, there have been some changes in the tax code that many of us have missed in the last minute negotiations. For starters: your tax bill will be going up in 2013. 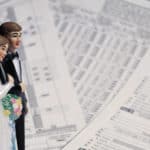 Although 99% of Americans avoided paying a higher tax rate thanks to Congress, we will all see a 2 percentage point rise in our payroll taxes. That is because neither party had the stomach to extend the tax cut President Obama had enacted in 2011. It means that households making between $50,000 and $75,000, for example, will see a tax increase of about $822 this year, while those making less ($40,000-$50,000) will see a $579/year tax hike.

The headline that most Americans understood after the eleventh hour American Taxpayer Relief Act was passed was that those individuals earnings $400,000 and families earning $450,000 would see their tax rates jump from 35 to 39.6%. In addition, as part of the law, a new 3.8 % tax is being levied on investment income for individuals making $200,000 and couples earning $250,000. High-income families will also have to pay higher taxes as part of Obama’s health care law.

However, beneath those headline numbers lurks even greater tax increases as a result of the loss of personal tax exemptions for many middle class income families. Most Americans recognize that $250,000 is a lot of money–if you reside in certain locales–but not much at all if you happen to live in Manhattan, Boston, Chicago or any other high-cost, urban center. Prior to the Tax Relief Act, a family of four, earning $250,000, were benefiting from $3,800 tax exemptions per family member.

Those advantages have now been erased, effectively raising taxes 4.4% for every dollar that family earns over $250,000. If you have six kids, your marginal tax rate jumps to 6% and so on.

Higher income Americans that make over $1 million could lose up to 80% of their itemized deductions for everything from health care, home mortgage deductions, charities and even state and local taxes. When all is said and done, if you add in the loss of exemptions, health care tax increases, etc. the effective tax rate for the highest earners could be as high as 45%.

Unfortunately, taxpayers in many Northeastern states, as well as those on the West Coast, will be hit the most since they normally use itemized tax deductions much more than the national average.

Some real estate-related deductions were preserved, such as allowing taxpayers to exclude income from the discharge of debt on their principal residence. This especially helps those who are considering a short sale or a lender-approved sale for less than the principal mortgage balance. It also allows a deduction for mortgage insurance payments for tohose making less than $100,000.

Another tax advantage for most Americans is the increase in contribution limits for retirement plans. You can now contribute $500 more to your Individual Traditional or Roth IRA for 2013, bringing the total to $5,500 with a $1,000”catch-up” contribution for those over age 50.

The same $500 increase in contributions will also apply to 401(k), 403 (b) and 457 Plans as well as for SIMPLE IRA plans for small businesses. Obviously, everyone should be contributing the maximum amount to these tax-deferred plans or as much money as you can reasonably afford to save toward retirement.

So it seems that none of us were able to dodge some increase in our taxes this year. Given the dire straits of the government’s finances, I guess we should be grateful it wasn’t worse.