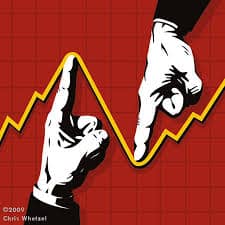 It was a tumultuous week. Investors should get used to it because volatility is going to be with us for some time to come. You can blame a lot of things, but the evidence suggests that the dollar is the main culprit behind the market’s gyrations.

The rate of ascent, rather than the direction of the dollar, is largely to blame for today’s market volatility. As readers know, the greenback has gained 22% in the last 12 months, a greater gain than at any time since 1982. The good news is that every year the dollar gained 10% or more during that time period, the following year the stock market has ended in the plus column. The range, however, has been quite wide from a meagre 1.45% to as much as 26.7%.

During those same years, the stock market has also had peak-to-trough declines of as much as 19.3% and as little as 5%. Given those numbers, investors can expect a rather rough ride this year in the averages.

How exactly, you might ask, does the dollar’s gain (something that most economists believe is a good thing for the nation) cause such extreme discomfort among stock investors?

As I said, it is all about the rate of ascent in our currency. It is extremely difficult for a large corporation to effectively hedge against a rapid rise in any currency, let alone the U.S. dollar. Remember too, that about 80% of the world’s commodities, a major input in production, are also quoted in U.S. dollars. Over time, (the key word is “time”) our companies will be able to hedge, thereby reducing the negative impact on export earnings caused by further gains in our currency. But in the short-term, financial results will be impacted negatively starting with this quarter.

Let’s focus on the companies listed on the S&P 500 Index as an example. Between 30 and 40% of corporate earnings and 46% of revenues of those U.S. companies are dependent upon exports. The dollar’s rise makes our exports less appealing to foreigners. I warned readers as early as last November that we could expect a string of disappointing corporate earnings announcements sometime this year as a result. Now that prediction has come home to roost. Earnings season, which begins next week, should see this dollar-fallout begin to impact many companies.

Wall Street analysts have been busily chopping their estimates for earnings, hoping to bring forecasts low enough to be able to say that their companies “beat” estimates. Traders this week are positioning themselves ahead of time for the carnage by selling stocks. Will they push stock prices low enough to discount the bad tidings ahead?

Clearly, investors were unsettled by the rapid and sharp declines of some of their favored “momentum” sectors such as biotech, technology and semiconductors this week. These are areas that have led the market higher and in the recent past have undergone similar free falls in valuation. I expect this see-saw kind of action to continue.

Could we fall further, say to the S&P 500 Index 200 day moving average (DMA)? It is about 50 points lower from here or about 3%. That is a distinct possibility, if not now, than later on in the year. The point is that readers should be aware of this trend and not panic on every sell-off. Rest assured that after each decline, stocks will rebound dramatically. It is what it is, simply another phase in the changing life of the stock market.