The markets are marking time. Earnings season is just about over. The lofty levels of the stock market survived those results largely because they were not quite as bad as expected. Now it is on to the next worry. 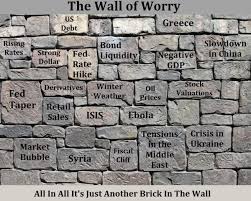 Pick your poison– uncertainty over this summer’s political conventions, can oil prices sustain these price levels or how about the possibility of a Fed rate hike in June? No question, there is a wall of worry out there, but so far the markets have weathered everything the bears have thrown at them. That is quite impressive given that we have had a 13% gain from the lows and hovering just a percent or so below all-time highs.

We have been trading in a tight range on the S&P 500 between 2050 and 2080 for a week or two. Stocks overall are going up or down depending on that days earnings results. Now, we should see prices break to the downside or, more likely, to the upside unless something unexpected occurs.

For example, the dollar (also in a tight trading range) could climb higher. That would threaten oil prices as well as the recent commodity run. Usually, a stronger dollar has a negative correlation with commodities.

Then there is Trump versus Clinton with Bernie still in the race. Most clients I talk to are quite worried about the outcome of the elections. In addition, all of the candidates continue to bang the drum of unemployment and weak economy. People tend to believe what they hear on the television news, if it is repeated enough times. Although the evidence does not support these political claims, when has a politician ever worried about the facts?

Then there is the never-ending central bank production of “will they or won’t they” that is playing to a sellout crowd. Never have there been so many who have worried so much over so small a rate hike. A new rumor or forecast over what the Fed will do next is always good for a 20 point move one way or the other.

Some readers have asked me if the year-long correlation between oil and stocks has been broken.  That remains to be seen. As long as oil trades between $40-$45/bbl., I think stock markets will focus on something else. However, if oil decides to move markedly lower, I am sure stocks will fall along with energy.

As I have written in the past, oil prices are notoriously hard to predict, but between now and mid-summer, demand for oil is usually stronger. So I suspect the risk of a waterfall decline in oil, if it were to occur, would likely be an August or September threat.

I am still worried, however, about a potential double-digit pullback in stocks sometime this summer. One scenario that could unfold might go something like this: the stock market climbs, surpassing the old highs. Even the bulls are surprised. That triggers a rush into the market. At that point, when most of the bears cover their shorts and talking heads are confidently predicting another 10% upside, we fail. The markets roll over as one of the fears outlined above comes true and down we go.

Could it happen that way? Sure it could. Stock markets can be extremely volatile during election campaigns. Add in the summer doldrums where there are fewer participants to lend sanity to the craziness of high frequency traders and you have a recipe for big market moves.

In any case, if this scenario plays out, I fully expect the stock market to recoup any losses and finish the year positive.