When was the last time anyone seriously considered a choice like that? Over the last fifty years, most Americans considered a college education as the only ticket to their slice of the American dream. The high cost of that education, coupled with declining incomes and fewer openings for today’s college grads make me wonder if there isn’t a better way forward for a large portion of our work force. 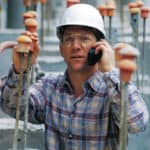 When was the last time you could get an electrician, plumber, or other skilled laborer to show up on the same day you called? Have their fees gone up or down? Why are there 200,000 or more high-paying manufacturing jobs left unfilled in this country in the face of 7.8% unemployment?  My point is that there is an enormous opportunity for millions of Americans to earn more money and live a more prosperous life than ever before, but they lack the skills to apply.

During the Cold War, John F. Kennedy urged this nation’s youth to enroll in college. It was their patriotic duty in order to counter Soviet aggression and technological gains. We listened and enrolled in college by the millions. The Vietnam War and the draft spurred even greater growth in university attendance. By the 1980s, college was the only answer to getting ahead. If you wanted an even better life, graduate school was the next step, so I applied. We called it the age of the MBA.

Trade and technical schools fell by the wayside. It was a place where only those who couldn’t pass their SATs would go, quietly and in shame. Attendance declined, schools were shuttered and those that did survive were as popular as the plague.

The globalization of the world’s economies, however, threw the world’s labor force on its head. What followed was a thirty year wrenching readjustment of worldwide employment practices. The developed world’s work force experienced a substantial decline in real wages, especially among its unskilled workers, while the labor force among emerging economies has enjoyed a high income and standard of living.

Here in America those trends have resulted in a stubbornly high unemployment rate (especially among the nation’s youth) and an imbalance in our skill sets. We have an overabundance of college-trained workers, an increasing (and unfulfilled) demand for skilled “blue collar” workers and a large number of undereducated high school graduates making the minimum wage.

The Center on Education and the Workforce at Georgetown University projects that between now and 2018, the U.S. economy will create 47 million job openings. However, less than a third of those jobs will require a college degree. Many of these new jobs will require some occupational training and skills. This new national demand will come from healthcare, construction, manufacturing and natural resources among other areas.

As a result, vocational or trade schools are making a comeback. Over the last five years these schools have experienced relatively strong growth, about 4.1% annually and are expected to continue to grow by about 2.6% a year over the next five years. At the same time, much of academia as well as the present government have changed their attitude toward vocational training.

Traditionally, we have considered vocational training as an institution that trains students for entry-level positions in jobs that don’t require a college degree. That may have been the case in my ‘Daddy’s Day,’ but vocational training is in a state of transition. Trade schools increasingly offer a much broader approach to education and are providing students with a variety of applicable skills. Today, technical school graduates are working in business, health, computer technology and various areas of administration as well as in the more traditionally-recognized blue collar jobs.

I have often said that opportunities for U.S. workers with only a high school degree are dismal at best and shrinking daily. These are today’s minimum wage employees. The present debate over whether or not to increase that minimum wage addresses a symptom rather than a cause in this country. In my next column, we will look at how technical schools and vocational training could help turn around the high unemployment rate of America’s youth, while lifting an entire segment of workers out of the minimum wage trap.