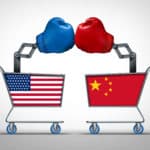 As we close out the summer, investors have had anything but a sleepy three months. The volatility caused by the Fed’s actions, Donald Trump’s tweets, Brexit, and tariff threats had markets gaining and losing billions–if not trillions–of dollars in assets on a weekly, and sometimes, daily basis.

The question you might ask is “Will it continue?” The short answer is yes, at least into October, unless a trade deal is signed. And what are the chances of that happening? Not very high, if you listen to the experts who profess to know and understand China.

A respected Deutsche Bank economist, Yi Xiong, wrote in a recent report that China has made up its mind to play the long game, something I have been warning investors might happen. Rather than come to the table, China will look to strengthen their domestic economy, while enduring any tariffs the Trump Administration might inflict upon them.

In order to understand their decision, you need to realize that China has been working for almost a decade to transform their economy from an export-led economy to a consumer-driven domestic powerhouse. As a result of this transition stage, China’s GDP has been cut roughly in half from 12% annually to 6-6.5% today.  The government hopes to complete the transition by 2025 or so.

As such, external trade makes up a small portion of their economy, no more than 20% of GDP and this percentage keeps shrinking. Contrary to the rhetoric you may be hearing or reading on Twitter, the majority of that trade is not with the U.S. As much as 80% of China’s exports have gone to other countries, rather than the United States.

As a result, the trade impact thus far on China has barely dented economic growth, contrary to claims made by others. While the overall economy has slowed, most of the decline can be accounted for by China’s own actions. In their stated desire to reduce national debt, government investment has declined, as has consumer spending, which accounts for most of the shortfall in their economic growth.

In response to the expected levy of U.S. tariffs on all their exports, China plans to adopt measures to grow their domestic economy. Additional spending on infrastructure and measures to boost domestic consumption have already been announced and are being implemented today.

At the same time, the government is diversifying its supply chain. It is accelerating efforts to open up their economy to other countries, while reducing reliance on the U.S. over the longer term. And as for combating the tariff hit to the price of their export goods to the U.S., China will most likely continue to devalue their currency, the yuan. This last month, the yuan has lost about 3.7% against the greenback, the biggest monthly decline since 1994.

What will all this mean for our markets and economy? More of the same, in my opinion. Without a trade deal, U.S. companies will continue to put off investment, which will, in turn, slow our economy (and earnings). Most other regions of the world are already in worse economic shape than we are, so don’t count on any spill-over in growth from elsewhere. Interest rates should continue to slide, sparking more and more calls for an imminent recession.

Our side will continue to raise, and lower hopes of a deal (most of which will be simple fabrication), while blaming the Fed for any shortfall in growth.  The president will deny that his tariff war has any impact on the economy, while desperately seeking ways to shore up the economy by more tax cuts, etc. If he fails, I expect he can always blame the Fed.

The only saving grace out of all of this may be the central bank and what it decides to do in two weeks. If they cut rates (and by how much), it may give the financial markets some support. In which case, you could see a big spike up as a result. Otherwise, expect more volatility while being trapped in a wide trading range.