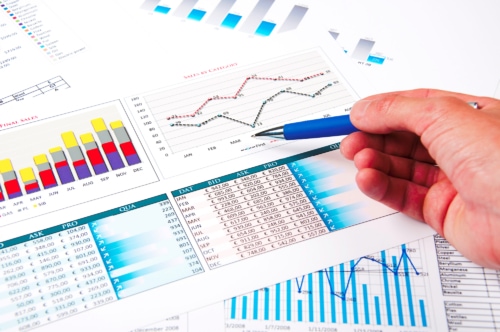 As stocks hit record high after record high, it might be normal to expect that equities will just get too expensive and collapse under their own weight. Not necessarily.

One of the investor’s favorite valuation metrics is called the forward price/earnings (P/E) ratio. The concept is quite simple: compute the market value of any stock and divide it by what the company is projected to earn over the next 12 months. If the ratio is higher than the long-term average, consider it expensive. It is considered cheap (generally) when the stock trades below that average.

The P/E ratio you can compute for an individual stock can also be applied to a market index, such as the benchmark S&P 500 Index. In late August 2020, the forward P/E of the S&P Index hit a high of 23.6. At the time, the index was trading at a bit more than 3,500. Intuitively, you might think that today that ratio would be much higher given the gains in the market. However, at the end of July 2021, that forward P/E was 21.2–lower than a year ago–despite a gain of 25% in the S&P 500 Index.

A 21.2 forward P/E is still expensive compared to the ten-year average of the ratio, which is 16.2%. Yet, according to one Charles Schwab equity strategist I admire, Liz Ann Sonders, an investor shouldn’t place too much weight on long-term historical averages.

During the early months of the pandemic, no one knew what companies were going to earn, so analysts took the most conservative approach, and cut earnings estimates drastically. That caused the forward P/E ratio to move higher.  Since then, as more information was forthcoming, earnings estimates have risen even faster than stock prices.

Second quarter’s earnings results are a great example of this. More than 90% of S&P 500 companies have beat estimates on both the bottom and top line. That is to be expected in a booming economy and will lead to even lower P/E ratios. Low interest rates also provide an added boost to earnings because the cost of borrowed money is much lower.

Investors should also remember that a growing percentage of companies in the S&P 500 Index are technology companies that reflect today’s market realities. As such, tech companies command higher valuations since their prospects of future growth are much higher. It is just something to remember when you hear someone citing forward P/Es as a reason to sell the market.

All the worries that have plagued investors last week still exist. And as is its custom, stocks continue to climb this wall of worry as we enter the month of August. As I expected, the averages have been volatile on a daily basis, with the NASDAQ clearly leading stocks higher.

I had coached readers to keep their eyes on the Semiconductor index as a “tell” on how bullish the markets remain. That index made a new all-time high this week, and appears poised to continue its gains.  Technology shares have been the best performers lately. I believe they will continue to take the lead as long as the number of Delta variant coronavirus cases continue to climb.

It is somewhat similar to the playbook investors used last year when COVID-19 had all of us in lockdown. No one knows how bad the Delta variant will be, nor if the next mutation, Lambda, will be worse.  The fear is that the pandemic will begin to hold back the economy and maybe even result in some lockdowns, causing investors to shun industrials, commodities, materials and financials in favor of Investing in FANG stocks, stay-at-home plays, and the Kathy Wood universe of new era, growth names that I call “Wood Stocks.”

The latest non-farm payroll report reported on Friday (August 6) was an upside surprise, however, with the economy adding back 943,000 jobs, while reducing the unemployment rate to 5.4%. Those numbers breathed some new life into those underperforming sectors, helping the overall market to continue to forge ever higher.