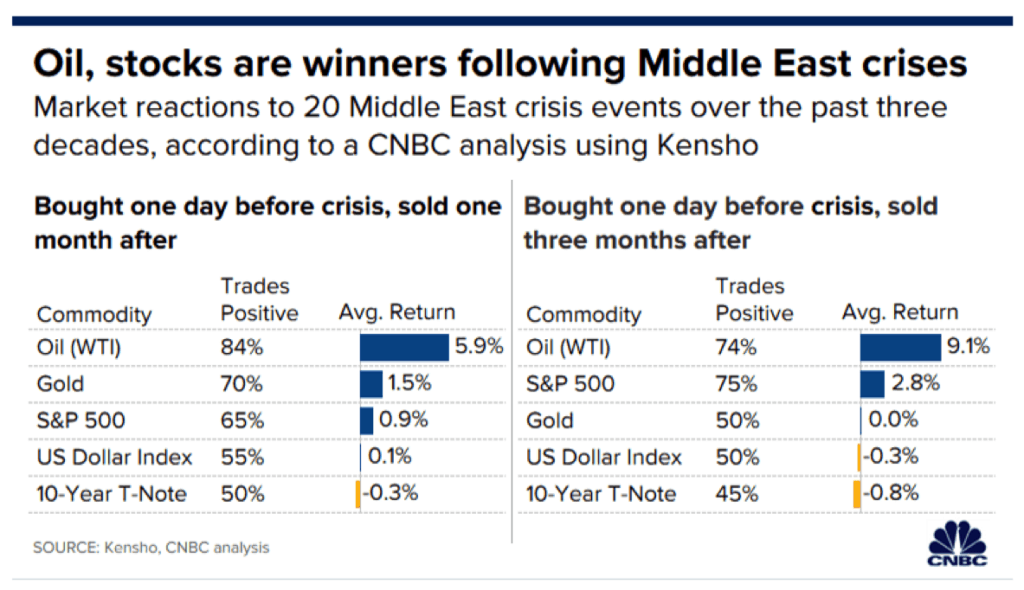 Dalton — When it comes to the stock market, whichever way the year starts is usually the way the year finishes. Mostly. And 2020 is off with a bang.

Since 1950, the history of the S&P 500 during election years is that, 82% of the time, it ends the full calendar year in the same direction as the first five trading days. On Jan. 8, 2020, the S&P 500 closed its first five trading days up 0.7%, suggesting that the odds are ever in your favor for a higher stock market in 2020. Interestingly, this same metric, while still positive, is weaker if you factor in non-election years; only 67% of the full year gains head in the same direction of the first five days when you consider all years.

I wouldn’t hang my hat on this statistic, but it’s just one more item on the list that makes me a bit more comfortable continuing to hold stocks of U.S. companies. I am, however, still very light on non-U.S. investments. I keep wanting to get back into the foreign markets, which my company Berkshire Money Management has been avoiding for some time, but I get continually get scared out of making that investment decision. I’m not typically scared of investing outside of the U.S., but we have been staying domestic for a long, long time now. It wasn’t always that way. Up until late 2007, it wasn’t uncommon for a BMM client to have as much as 20-25% of their portfolio invested in Europe, and a similar amount invested in Asia, mostly China. And then I read something like the Deloitte CFO Survey and find that nearly all chief financial officers said expectations for Europe and China are lousy, with only 7% and 18%, respectively, seeing conditions there as good.

The good news is that this group does not see a recession in 2020, although they do expect the economy to slow down relative to 2019, which experienced a growth rate of about 2.25% in gross domestic product. But what the CFOs say and what they do may be two different things. The surveyed CFOs see both consumer and business spending slowing in 2020, so 82% of them anticipate taking more defensive actions, such as laying off employees or reducing discretionary spending, as a means to prepare for potential weakness. It seems to me that if 82% of companies make those types of defensive actions, that could tip us into a recession. But they don’t think so. Let’s hope they’re right.

The CFOs claim that the biggest boost to any growth will be to achieve a full trade agreement between the U.S. and China. The so-called Phase I agreement between the two nations is expected to be signed Wednesday, Jan. 15, but they are worried about the continued public negotiations after the signing, which will reduce clarity in the CFOs’ collective decision making, meaning they’ll be less likely to take action. The CFOs are also concerned about the 2020 presidential election, with nearly two-thirds arguing that economic performance will depend significantly on who wins.

The CFO’s bosses, the CEOs, agree that the U.S. economy will slow, but not go into recession in 2020, according to the Conference Board’s CEO Confidence Survey. Still, CEOs cite a recession as being their biggest concern for 2020, followed by more intense competition, a tight labor market, global political instability and uncertainty about global trade.

Let’s hope that they are both right, and the economy holds up in 2020, because I’m not so sure we can continue to rely on central banks to pour fuel onto the stock market fire. Not too long ago (remember the fourth-quarter stock market crash of 2018?), both the European Central Bank and the Federal Reserve were both trying to reduce their balance sheets (bad for the equity markets), and the Fed was talking about raising interest rates. Then, in 2019, the Fed cut rates. And as I wrote in last week’s column, in the last four months of 2019, instead of reducing its balance sheet, the Fed expanded it by about $600 billion (good for the equity markets), which was a quicker pace than that of any other four-month period since the Great Recession. That column was posted Tuesday, Jan. 7. Know what else happened Jan. 7? The Fed bought another $7.5 billion in Treasury bills, further expanding its balance sheet. Also, the Federal Reserve Bank of New York added nearly $100 billion in short-term liquidity through what’s called a repurchase, or “repo” intervention. A repo involves taking in bonds from eligible banks, which is effectively a short-term loan of central bank cash, collateralized by those bonds. Oh, and on the Monday before that, the Fed added $76.9 billion of repos.

Repos aren’t anything new, but the use of them has certainly increased over the last four months. In September there was a largely unexplained spike in the in short-term rates, including the Fed’s own federal funds rate. Since then, the repo market has been very active as the Fed has poured liquidity into it. My concern is that the Fed will begin to gain comfort in the functioning of short-term interest rates, then decide to reduce the balance sheet just before a shock coincides with less liquidity and super-high stock valuations. Right now, it looks like the Fed is saving us from a nasty 2020 in the stock market. Therefore, I should theoretically relax and enjoy today’s record-high stock prices. However, I’m just too nervous about tomorrow.

And just how high are stock valuations for the S&P 500 stock market index? I mean, besides the previous description of “super-high.” I’ve mentioned several different valuation methods in previous columns, mostly showing the stock market to be either fairly valued or over-valued (the market just ain’t cheap). One method of valuation is the price-to-sales method, which is comparing the ratio of market capitalization of the S&P 500 index components to the aggregate sales of its components. Using some estimates for the fourth quarter of 2019, the price relative to sales ratio for the S&P 500 is well above where it was in 2007, and even higher than that of the tech bubble of 2000. Sure, yeah, you’ve got to account for interest rates being so low when valuing equities. Today, the federal funds rate is set at a range between 1.50% and 1.75%, whereas the average rate since 1964 is about 5.2%. So that’s one thing.

Another thing is that Morgan Stanley calculated that there is way more room to run for stocks based on other interest rates. According to FactSet, the average dividend yield for the stocks of the S&P 500 index is running at about 2%, which is above the yield of the 10-year U.S. Treasury note’s yield of about 1.8%. According to Morgan Stanley, that average dividend yield for S&P 500 stocks typically is about 20% less than the 10-year yield. Keeping the 10-year yield constant, the S&P 500 would have to gain about 1,000 points, or 30%, in order to reach historical parity. I don’t know. If I’m being intellectually honest about it, I probably try too hard to find all the things that can go wrong. But even with all the extra liquidity that hits the stock market because of the lower interest rates, I feel as if this calculation is an overly optimistic stretch. It just seems that 1,000 points on the S&P 500 is a lot of gains to be attributed to interest rates. If anything, it’s probably more likely that stocks are where they are now because of interest rates, as opposed to being fuel for much more. The Fed’s continued expansion of its balance sheet, however, could be the fuel for further gains. I’ll keep an eye out if that’s trending better, or worse, for the stock market.

That extra liquid rocket fuel from the Fed hasn’t allowed either Iran or an impeachment to derail the stock market from reaching all-time highs. Will an election finally knock stocks back to Earth? I’m beginning to think the market won’t care about the White House so long as the central banks remain supportive. It’s possible that even if the CFOs are right and the economies of Europe and China are lousy this year, the right amount of Fed juice will buoy the stock market. It speaks to a real difference, a disconnect, between the economists and the investor class. For folks like me, who walk the line between the two, it creates tremendous stress. The stock market shouldn’t be doing what it’s doing. But since it’s doing it, I don’t want to sell my stocks and not participate. This game can only end badly, but for now, the game plan is to bet that the excess liquidity, the more increased money supply, created by the Fed will trump uncertainties like global tension and presidential elections. As the uncertainties pile up, and the Fed’s balance sheet masks those risks by providing that rocket fuel for the market, stock prices become more vulnerable to a shock. I’m scared of tomorrow’s hangover, but since I’m at the party, I’m going to dance.

This article originally appeared in The Berkshire Edge on January 15, 2020.