Coming into this week’s Federal Open Market Committee meeting, investors thought they had a handle on what the central bankers planned to do about interest rates. Once again, the Fed threw us a curve. 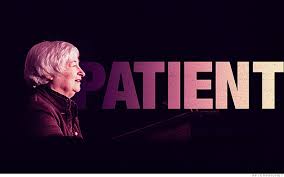 The bet was that the word “patient,” in regard to when the Fed might raise interest rates for the first time in nine years, would be removed from the language of the FOMC policy statement. That would signal, according to Fed watchers, that the first hike in interest rates would occur as early as June.

It was a scenario that would almost guarantee that the dollar would continue to gain ground against the world’s currencies, while oil continued to fall. Short-term interest rates would rise in anticipation of that move. But what happened was not quite what investors expected.

Yes, the word “patient” was removed, but Janet Yellen, the Federal Reserve Chairwoman, made it clear that the change in wording did not mean that the Fed was suddenly “impatient” to raise rates. Quite the contrary, Yellen made it quite clear through her words and new central bank forecasts, that the Fed was in no hurry to raise rates. And, once they did, the rate rises would be far smaller than most economists expected.

Investors were once again taught the lesson that has held true since 2009—don’t fight the Fed. By the close of the market on Wednesday, the Dow was up 227 points (it had been down 100 points just prior to the 2 P.M. release of the Rate Decision) while the dollar and interest rates plummeted. The greenback had its greatest decline against the Euro in six years, while the ten-year Treasury note fell below 2%. Oil skyrocketed, as did other commodities. It was a good day for those who have been following my advice to stay invested.

Since then, however, the financial markets have continued to experience a heightened level of volatility, only now the currency world has joined the bond and stock markets in their daily gyrations. Thursday the dollar regained over one percent of its fall and then promptly gave it back on Friday. In sympathy, the stock market has run up and down alternating between acting like “Chicken Little’’ and then the “Road Runner” on any given day.

I can commiserate with the day traders and HFT computers that are caught between a rock and a hard place. The Fed, by opening the door to an interest rate hike, has introduced a level of uncertainty in the markets that had not been there last week. Clearly, they plan to raise interest rates at some point. However, no one knows when. Will it be in June, September, the end of the year, or maybe even next year? That will depend on the data. Short term players can’t cope with that.

All you need to know is that the Fed plans to raise interest rates in the months to come, and when they do; it will be so gradual that most of us won’t even notice. The Fed also put dollar bulls on alert that the blistering pace of gains will likely be tempered in the months ahead. The dollar will continue to strengthen, but likely at a more sedate pace. That should also mean that oil (since it is priced in dollars), should see a more moderate rate of decline as well. My target for a low in the oil price is around $40/BBL and it almost reached that number last week.

As I warned readers in December, volatility will be on the upswing this year. So far that forecast has been spot on. How do you deal with volatility, by ignoring it? Stay focused on the year and not the weeks or months ahead. That’s how your portfolio will profit in 2015.