From the point of view of the gay community, the economic impact of legalizing gay marriage is a no brainer. But what are the costs and benefits to the economy overall, regardless of your sexual inclination? 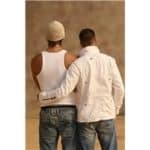 It has been estimated that same-sex couples denied marriage benefits in the U.S. will incur additional expenses of $41,000 to $467,000 over their lifetime, compared to heterosexual couples. Since there are roughly 594,391 gay couples (1.2 million people) living in the U.S., we are talking as much as $2.5 billion to $277 billion in expenses. Assuming gay marriage was legalized throughout the country, that money would be available to be spent on more productive pursuits.

Most of the stories I read focus on the immediate economic benefits to those states that have legalized same-sex marriages. Things like marriage licenses, wedding halls, photographers, etc.

In neighboring New Jersey, where almost 17,000 gay couples reside, legalizing gay marriage could generate up to $119 million over three years once legislation is passed. The same was true in the other states where gay marriage is legal (Massachusetts, Connecticut, Iowa, Vermont, New Hampshire, New York, Washington, Maryland and the District of Columbia).

Yet, these numbers are infinitesimal compared to the potential costs that we the taxpayer would incur if gay marriage were legalized throughout the country, argues the anti-gay marriage community.  They argue that gay marriage would entitle gay couples to typical marriage benefits including claiming a tax exemption for a spouse, receiving social security payments from a deceased spouse and coverage by a spouse’s health insurance policy.

No one knows for sure what that bill would be if the country did legalize same –sex marriage, but we can at least gather hints. For example, the Congressional Budget Office estimated that the cost to the federal government of extending employment benefit to same-sex domestic partners of federal employees (ex the post office) would be $596 million in mandatory spending and $302 million in discretionary spending between 2010 and 2019. That’s really a drop in the bucket when talking about the Federal Government’s budget.

A joint study by the Human Rights Campaign Foundation and the Institute for Gay and Lesbian Strategic Studies analyzed the cost to American businesses of same-sex marriages. They looked at health care benefits and concluded that at most 190,000 businesses out of approximately 2.9 million firms would experience a health plan enrollment of a new gay spouse. In a large business, where employee benefit costs are in the millions of dollars, the company might see an average rise in costs of just under $25,000/year. In small businesses the dollar impact would be very small, possibly as low as $40/year at most.

Defined contribution plans, which make up over 80% of all retirement plans, would not be affected at all since employer contributions are not based on family status. Defined benefit plans (pension plans) are more complicated although they only represent about 20% of all employees and only 8% of small businesses. The costs to a pension plan, depending on the employee’s choices, would not change much either.

As far as social security benefits, the number of new surviving spouses receiving benefits would not be large enough to make much of a difference to overall benefits. As for the income tax benefits of being married, we all know that blade cuts both ways. Some couples would benefit depending upon their income, but others in a higher tax bracket, would actually pay more taxes.

Overall, the economic impact of gay marriages, in my opinion, would be a net positive for our nation, for the taxpayer and for the future productivity of our economy. The moral issues involved are a completely different topic and one that this writer will leave to the hot heads on either side. I’m too old to judge anyone, even myself.