A stream of destitute refugees arrives on European shores every day. Greece, Hungary and Italy have borne the brunt of this migration, but the ocean of displaced persons this year has already swamped their resources. It is a life and death crisis that demands an answer now. 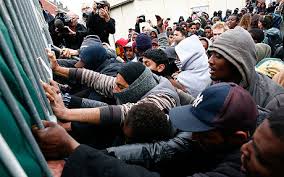 Unfortunately, the European Union is neither accustomed to, nor organized in a fashion that allows for rapid decision making, especially when it comes to political problems like this. Something as knotty as what to do with the influx of over 500,000 illegal immigrants over the past year has taken European leaders out of their comfort zone.

Normally, a long process of consensus-building among EU members is necessary before political or economic decisions can be implemented. As an example, think of the time and effort that was necessary to bail out Greece. But this emergency won’t wait. The drowning of hundreds of migrants in April, the discovery of a truckload of dead refugees in Austria last month and the recent front page photo of a dead three-year old immigrant in Turkey underscore the fact that political dithering means additional lives lost.

Faced with public outrage, the European Commission’s President, Jean-Claude Juncker, proposed a plan to redistribute 160,000 refugees across the European bloc. The plan must be approved by a qualified majority of EU governments. Even before countries vote on the plan, it is obvious to everyone that it falls far short of a solution considering the numbers of migrants expected to descend upon the continent.

Many of the immigrants are political refugees from the Middle East (mainly Syria, Afghanistan and Iraq). For several years, we have all watched on the nightly news the plight of these refugees living in squalid camps in Turkey, Lebanon and Jordan. At this point, however, these countries cannot take any more refugees, nor do they have the resources to care for those in the camps.

Lebanon, for example, has taken in one million refugees. Given that their entire population amounts to 4.5 million, the overload of immigrants is destroying that country. GDP is expected to decline 3% this year as the government and economy collapse under the weight of refugees. Faced with starvation or worse, many of these camp migrants are escaping to Europe with the help of smugglers.

Part of the problem within Europe is the routes used in smuggling these immigrants into the EU. The Mediterranean gives smugglers and others easy access to Italy and the Greek Islands. From there, refugees travel over land in pursuit of economic opportunity wherever they can find it. Countries such as Germany, Finland, France, Spain and Great Britain are attractive end points for these immigrants.

Faced with already high unemployment rates, slow to no growth economies, and overburdened social spending programs in many cases, European countries are not in the kind of economic shape to support an influx of destitute migrants. Many governments (and voters) believe these new arrivals will simply add to the strain they are already feeling. In Eastern Europe, religious and cultural differences have created a backlash against accepting any migrants at all.

In addition, many European countries have little or no experience in accepting and processing refugees, which makes an EU Pan-European approach that much more difficult to implement.

Europe has faced and managed emergencies like this before. The Yugoslav wars of the 1990s and influx of Vietnamese “boat people” are just two that come to mind. Yet, the number of migrants seeking asylum in Europe today is higher than at any time since World War II. Meeting this challenge will test Europe like never before. Let’s all hope that Europe’s politicians are up to the task. Otherwise this crisis will only get much, much worse.