All you need do is look out your window to understand that a drought has descended upon our region. Aside from yellow lawns and possibly local restrictions on watering your grass, most of us here in the Northeast haven’t felt its real impact—yet. 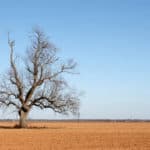 Naturally, those who farm for a living would beg to differ since they are watching their livelihood shrivel on the stalk or vine daily and if the dry spell keeps up they too will join the ranks of a growing list of U.S. counties (over a thousand today) that are applying for federal disaster relief.

Over 60% of the country is in the grip of the worst drought “since the late 1950s,” as the media is billing this weather event. And as droughts go, “you ain’t seen nothin’ yet”. In the Fifties, for example, the state of Texas suffered a seven-year dry spell that was so bad that children born in 1951 grew up with no knowledge of rain. Dust storms that turned day into night were so powerful that they stripped the paint off of license plates.

Of course, nothing in modern-day American history compares to the drought of the 1930s. As the new decade began, the country was still grabbling with the aftermath of the 1929 stock market crash. At the same time, the U.S. experienced two dry years in a row in 1930-31, especially in the East. As the economy faltered so did the rain and by 1934, 80% of the country was in a drought and a depression.

Anyone who has read Steinbeck’s “Grapes of Wrath” has a general idea of how bad a drought can get. Scientists believe the period of 1933-1940 was the worst drought in North America in 300 years. Dust storms, especially in the Great Plains, were daily events and by 1934 it was estimated that 100 million acres of farmland had lost most or all of the topsoil to the winds.

It was at that time, after weeks of storms that the mother of all dust storms hit the nation (Black Sunday, April 14, 1935). Sixty mph winds spread the grit and dust from the Great Plains all the way to Washington, D.C. The term “Dust Bowl” was coined a day later by the Associated Press to describe conditions in the Great Plains. I provide this history lesson for a reason.

History often rhymes. There are some similarities in both the economy and the weather today compared to the 1930s.  We experienced a crash in the markets in 2008-2009 brought about by speculation and a credit crisis and are still struggling with the aftermath just like we did in 1929-1930.  Today, like then, we worry over this country’s huge deficit, out-of-control spending, high unemployment rate and slowing economy. Events are eerily similar to what transpired in the U.S. in the early 30s.

Droughts cause dislocations in the economy whenever they occur. They exasperate existing economic conditions. In this country if you look at the pattern of 20th Century droughts, they normally occur every twenty years, so we are overdue for this dry season.   Aside from the predictable impact on food prices, droughts create a chain of cascading secondary effects from lost agricultural jobs and businesses to higher utility costs and other industry costs in the developed world to population displacements and political unrest in emerging markets.

If one looks at just the price of corn in the United States, which has increased in price by 38% since June 1, it is not hard to predict increases in processed food prices by the winter. Since other staples, like soybeans and wheat, are also wilting in the heat  there could be a domino effect across the board for all kinds of agricultural products.

It might surprise you, however, that the prices of beef, poultry and pork might actually decline in the short term. That’s because livestock producers would rather send their herds to slaughter now than face the increased costs of feeding them in the future.  Out West, (today’s potential Dust Bowl) many ranchers have simply run out of range land that could support their herds. As this new supply of livestock is dumped on the market, prices should ease a bit before heading up, so plan accordingly.  The best strategy would be to stock up now and freeze for the future.

I guess the best that can be said of this drought is that it has a way to run before it can compare to the worst that Mother Nature has thrown at us in the last century. It will most certainly cause more drag on the economy, increase the deficit through Federal relief assistance to farmers and put pressure on the unemployment rate.  Under that scenario, is it any wonder that the markets are expecting more stimulus from the Fed? Barring that, I guess we should all brush up on our rain dancing.