For well over 20 years I have been guilty of the sin of cluttering. It is only now, after I was finally forced to address the consequences of my actions, that I can write this column. This is my confession. 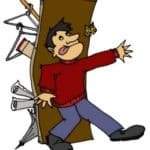 Before you judge me too harshly, let me remind you that Americans overall are guilty of clutter. In fact, we are besieged with clutter. The average U.S. household has at least 35 unused items taking up room in their homes, which is remarkable given that the size of an American home has grown by 53% in the past 30 years. Our clutter is so bad that fully 25% of people with two car garages can’t park their cars in that space because of the mountains of junk we store there.

We have bought and saved so much stuff that one out of every 11 Americans now rents a self-storage space for approximately $1,000/year. No wonder that storage facilities have grown to a $154 billion industry.

On average, it must cost me about $10/square foot in lost living space to store all the junk in my house. If I had to bet, I would guess I’ve spent at least one whole year of my life just looking for lost items amid the stacks of boxes and crates in my basement, attic and spare rooms.

In our house, clutter had grown so acute that at times there was barely enough room to walk through piles of furniture and other items. Fortunately, it is a weekend house which we frequent less and less so we don’t have to live with the mess full-time. I realize now that it has doubled as our storage unit for the last decade or so.

During that time we lived in Manhattan where we changed apartments frequently. Every time we moved, we would dutifully pack the contents of our living space into two piles: one for the new apartment and the second to be stored in the country house for further sorting. The problem was we never sorted.

Instead we just added and added to the boxes already in the basement until we couldn’t open the door. At that point the clutter started to back up into every spare bedroom, hallway and living space that wasn’t in use.

In hindsight, it probably increased the time we spent cleaning by 40% and our stress levels by 100%. And don’t get me started on the books. Did you know that Americans discard an average of 4,583 pounds of books and magazines annually and I contribute more than my weight to that statistic?

So how did I find religion?

It came to a head when we decided we were not using the place as often as we had in the past. We didn’t want to sell in this market but discovered that rental properties in our area are in great demand right now. The first thing we did was contact a rental agent to take a look at the space. After a brief inspection, she made it quite clear that before anyone would even consider renting the property, we would have to get rid of the clutter—all of it.

I credit my wife, Barbara, for most of the rest. Believe it or not, we are in our fourth weekend of extreme downsizing and apart from my back ache, it actually feels good. Getting rid of stuff was not as easy as we thought. We didn’t want to go the yard sale avenue because we felt the process would take too long and the money not worth our time.

We actually tried to give it away over two weekends after advertising in the local newspapers and internet. Only six people showed up the first weekend and less the following week. Then we called Goodwill. They took a truckload but that barely made a dent. Then we rented a 10 yard dumpster, which we filled in just two days. Only then could we begin to see the walls of the basement.

This last weekend, we started on the clothes closets and have already filled six huge trash bags of perfectly wearable sweaters, vests, swim trunks and jeans. That leaves four more closets before we can get started on the living spaces. I have taken to calling it “The House of Pain.”

So far there have already been some cost savings. I have found some replacement items that have saved me from going out and buying new running shoes, gym clothes, winter gloves and other items. There is also a benefit to the soul in donating these things to charity. I also didn’t realize the stress all this clutter was causing in our lives; maybe there is something to this Feng Shui stuff.

After a few more weekends of this, I might actually be able to visualize a home where I would want to entertain guests. As the clutter declines, I’m beginning to see the original beauty that prompted me to purchase the house in the first place. Who knows, if things continue to go this way (and my back holds up), we may just end up spending more time here and forgetting all about the rental idea.