As the GOP political convention winds down and the Democrat convention gears up, we continue to hear a steady stream of economic ‘one liners’ from the candidates. We all know that fixing the economy is one of the major issues of this campaign but so far the candidates are long on words and short on specifics. 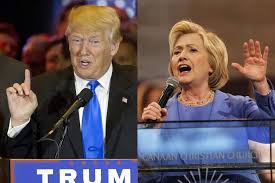 “If I’m elected,” promise both candidates, there will be more jobs, trade, wages and growth. According to them, all we need do is check the right boxes come Election Day and the rest will be a foregone conclusion. Historically, Wall Street and corporations vote Republican because the GOP is good for business, while labor, minorities and the “have nots” back the Democrats. However, times and the issues are changing and so are the candidates.

Take the banking sector, for example, both parties and candidates this year have targeted Wall Street as a villain in need of chastisement. The GOP has made a re-instatement of the Depression-Era, Glass-Stegall Act a plank in their platform. Repealed under the Clinton Administration, the Act had prevented commercial banks from entering the capital markets.

Democrats Elizabeth Warren and Bernie Sanders (as well as the public) have blamed the banks for the entire financial crisis fiasco which was brought about by the repeal of the act.  The banking sector’s involvement in capital markets and the creation of derivative products such as mortgage-backed securities in large part brought down an enormous financial house of cards that threatened to sink all of us.

Free trade is another area where roles appear to be reversed between the candidates, if not the parties. Protectionism has always been part of the Democrat’s list of issues, although the label itself was usually shunned as un-American. It stems from the days when labor unions were large and free trade was thought to threaten American workers’ jobs and pay checks.   As the party of the worker, Democrats traditionally tried to protect the blue-collar voter. Today, we have Hillary Clinton defending free-trade agreements while Donald Trump is promising to dismantle them.

Taxes, of course, are always an issue in every election. Tax reform usually occupies center stage with Republicans, with corporations the leading beneficiary of their policies. The “tax and spend” party, usually a Democrat label, however, is also promising those same corporations tax relief this time around.

Each candidate has a grab bag of goodies for individual sectors of the economy, such as Trump’s promises to help oil and gas, coal and other mining companies through a change in the regulatory environment.

Hillary Clinton promises to hike the minimum wage and possibly include more illegal immigrants into the legal system that could help consumer spending and therefore the retail sector. As in so many prior elections, I discount most of these promises as political rhetoric to woo certain states and voting blocs to one side or another.

We will have to wait until next week to examine the Democrat’s party platform, but I wouldn’t be surprised to see more commonalities than differences between the two parties’ planks. This is, in my opinion, a reflection of the populist resurgence in this country. The anger Americans are expressing over the state of the economy and their place in it has crossed party lines. Those among the party faithful who ignore it, do so at their own jeopardy.

Nurses and other healthcare professionals in the Berkshires and across the United States find themselves in a unique retirement situation: the 403(b) offered by their employer can be stewarded by the financial management firm of their choosing...
Bundling up on Black Friday to shop for great deals on TVs, iPods, and holiday gifts while still full of Turkey and stuffing is a thing of the past. While our bellies have remained stuffed, our Black Fridays...
Stop in for free, judgement-free financial advice! Financial Advisors Holly Simeone, CES™ and Lauren Russo, CEPA, FPQP™, CVB, together with Paraplanner Angela Elzner, FPQP™, invite you to invest in your financial health by joining them during Open Office...