Ladies, are you secretly terrified that you are going to end up penniless on the streets, begging for enough money to feed yourself? Well, join the crowd because almost 50% of women share your anxiety. 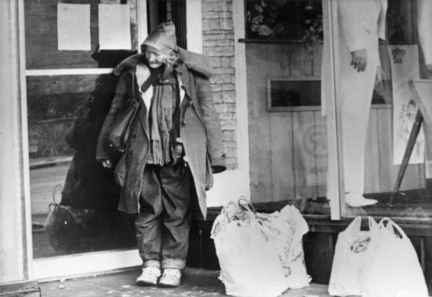 That’s right, a high percentage of women, even those who make more than $30,000 per year (and 27% of women who have salaries over $200,000) are secretly (or not so secretly) worrying that they will become destitute in their old age. The study, conducted by Allianz, an insurance company, surveyed 2,200 women between the ages of 25 and 75.

You might discount these findings, figuring that most of the women surveyed were stay-at-home wives or wealthy widows. You would be wrong. Sixty percent identified themselves as the “breadwinner” in their family and 54% were the household’s appointed keeper of the purse strings. Fifty-three percent of single, divorced and widowed women admitted to the bag lady syndrome but so did 43% of all married women.

It appears that these fears are not relegated to American women. German, Russian, English, just about all women across the pond, identify with the syndrome (although the jury is still out in regards to Asian women). It is understandable why women in America should be concerned, given the facts.

Women are almost twice as likely as men to live below the poverty line during retirement. Single and minority women feel it the most. Women, who are 65 or older; make do with a median income of around $16,000/year, or $11,000 less than men of the same age. Why would that be?

Women earn and save less over their lifetime than men. I have written numerous columns detailing why. From the continued inequity of receiving less pay for the same job as men, to the erroneous assumption that men are the breadwinners and women are the caretakers, the odds continue to be stacked against women in this country (and in Europe).

However, the bag lady syndrome goes far beyond these obvious facts. It seems that men have this attitude towards work that a job is their birth right. If one doesn’t work out for whatever the reason, there is always another one. If more money is needed, they simply work harder or get two jobs or assume they can and will do whatever it takes. Women, in general, don’t usually feel that way for the following reasons.

While job opportunities are better for women than ever before in this country, in order to succeed, women still need to “show” they can do the job. They need to work harder, outperform and get along with their male counterparts to an extent that male workers do not. The system has still not come to grips with all that we expect from our women. They need to be mothers, home managers, caregivers for dependent parents, as well as professionals. Employers and Social Security (and tax-deferred savings plans) penalize them for taking time off for rearing children or parent care. As a result, they save less.

Curious to see how my female clients and friends would respond, I did my own small informal survey. I asked them if they were affected with the Bag Lady syndrome. Here is what they said.

“Yes, I do,” said the 57-year-old president of a local company, who owns two houses, has substantial retirement savings and money in the bank. “I feel like I only have a small window of time when I can live on my savings, but what’s going to happen when I’m ninety and my money and my husband are gone?”

“I fear I won’t have enough money to retire. I’m 43 and even though I have full faith in my husband, what would happen if he died, or the market crashes or something like that,” answers a 43-year-old, part-owner of a successful firm.

“I am pretty close to that…for me it’s not a fear, it is very close to becoming a reality,” answers a single, middle-aged women, who is not only hard-working but intelligent and a former business owner.

Yet, the younger the woman I asked, the less concerned they were with what would happen to them by the time they reached retirement age.

“No, but I have a modified version of that syndrome,” explained a 35-year-old professional with two young children. “I am concerned that my children won’t be as comfortable growing up as I was. As for me, I can get a job, any job, if I want it enough and I’ll never be destitute.”

And finally this is the answer from a working, twenty-something female professional.

“No, not me, that’s too far away to even think about,”

I can only assume that the further one is from retirement, the less anxiety there is among women over how they will support themselves in their old age. In addition, the workplace experiences of women today are far different from those of a middle-aged or elderly women. That could also change feminine attitudes in the future. We will wait and see.

Dalton — I don’t have the skill set to persuade someone to vote for one candidate or another. I wouldn’t waste my time, or yours, trying to do so. But I am going to say some things about Vice...
There is not much good one can say about the coronavirus, but if one looks hard enough there are a few silver linings. One of which is the revival of the drive-in theatre. Cinemas have been closed for...
Credit the Fed for this week’s bump up in the averages. Technology shares led the charge as usual, shrugging off a sinking economy, higher unemployment, and no progress on another bail out. What else is new? At the...