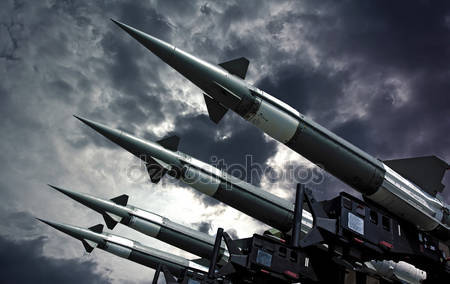 The geo-political landscape is heating up. U.S. relations with Syria, North Korea, China and Russia are in turmoil as the Trump administration flexes its military muscle. None of it bodes well for the stock market.

War cries and wealth are like water and oil. They don’t mix well. For investors, there are far too many unknowns, especially when U.S. warships are steaming toward the Korean Peninsula. In Syria, American troops were spotted alongside Jordanian Special Forces troops along the border, despite our president’s assurances that boots on the ground are out of the question. Actually, that isn’t quite true, since U.S. Special Forces have been operating alongside our Syrian allies for some time.

Then there is Secretary of State Rex Tillerson’s visit to Moscow. This diplomatic venture is a follow-up to last week’s U.S. surprise tomahawking of one of Syria’s airbases. Tillerson will be using America’s new-found, willingness to use military might in order to further our diplomatic ends. In this case, to convince Putin to sever ties with Syrian dictator Bashar-al-Assad.

In hindsight, all that media speculation about President Trump’s cozy relationship with Vladimir Putin seems somewhat far-fetched, given that Secretary of State Rex Tillerson (who was also thought to be buddies with Vlad) is reported to be pursuing a hardline against Putin’s failure to reign in its client state.

On yet another front, it appears President Trump has had enough grief from the “Fat-Boy”– Chubby Kim Jong-un, grandson of the nation’s founder, Kim II-sung, In a duel of tweets, the dictator warned of “catastrophic consequences” from any U.S. military action, while “The Donald” warned that “North Korea is looking for trouble” and that we would “solve the problem” with or without Chinese help.

Both sides have backed up these words with firepower. The U.S. response, in the form of an aircraft carrier and three guided-missile destroyers, is heading for North Korea while China has amassed 150,000 troops on its border with North Korea. In addition, Chinese medical and back-up units have been stationed on the Yalu River in support of the People’s Liberation Army. Most military strategists believe that April 15 might be the day when things could heat up. It is the 105th anniversary of Kim Long-un’s grand pappy. It could be an auspicious date too for “the Fat-boy to brandish the puppet state’s military might.

While all this is going on the markets have grown increasingly restive. The threat of war is normally a time when investors seek safety. Safe-haven plays such as gold, U.S. Treasury bonds and the U.S. dollar benefit from these concerns. They have done so this week. About the only good thing that can be said for these tense times is that they don’t last too long.

If tension escalates, stocks usually fall fast over the course of a few days. If, as has happened in the past, geo-political events resolve themselves, markets recoup their losses in an equally short time. Since the new administration appears to be trying to remove two thorns in our side simultaneously, the chances of further tension seem high. My advice is not to panic. Hang in there and remember that this too shall pass.