We take our local supermarkets for granted. Like gas stations, there seems to one on almost every corner, at least in suburbia. With competition from a variety of sources, supermarkets have been forced to reinvent themselves and are doing a good job doing just that. 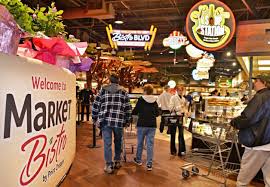 Historically, supermarkets are a low-margin business, barely eking out 1-2% profit margins annually. Even the “hot” areas of the grocery market, like natural. organic and gourmet food emporiums only command 3% to 6% margins but to the big store chains that’s an attractive option.

In addition, the supermarkets industry is highly fragmented with the top ten chains only accounting for 35% of the total number of grocery stores (although they account for over 68% of total industry sales in this country). In order to increase profitability, supermarkets are reinventing themselves and benefiting the consumer in the process.

Given that I’m the cook and grocery shopper in my family, I have some first-hand experience in shopping through this transition and so far I like what I see. Clearly your local megastore is going after the natural and organic food shopper. Most readers already know that you pay more for those items, substantially more in some cases.   Have you also noticed that you are seeing more “local vegetables” right alongside those that are shipped in from elsewhere? If you are price conscious (like me) you might also notice the price difference. You could be paying as much as 50 cents more per pound for that locally grown spinach or kale but its fresh and you are supporting local farmers, right?

Supermarkets are adding other products and services where profits are far higher than that box of mac and cheese on sale every other week. Look for those “specials” to continue since middle and low-income shoppers account for 70%of grocery sales. Most shoppers tend to be price conscious and will switch if they feel that one chain’s prices are better than another’s. In fact, super stores are marketing their weekly special flyers with renewed effort. The name of that game is to get the shopper into their stores.

Since food shopping is essentially a sensory experience, the grocery store is hoping that once in the door the consumer will be susceptible to the siren call of other more high-priced items that promise a variety of convenience, culinary and even educational experiences.

More and more markets are adding pharmacies, bakeries, coffee shops as well as salad bars, chef-prepared entrees, brunch stations and gelato bars. And God-forbid if you go shopping hungry, I fully acknowledge that the sushi bar or an impulse order of hot wings at the grocery store has replaced my occasional visit to a fast food burger chain or restaurant. All of that adds meat to the supermarket’s net profits.

Since I, like 92% of American adults, believe that eating at home is healthier (and cheaper) than eating out, my main objective in the supermarket is still shopping for fresh food. However, I’m frequently drawn to the seafood or butcher’s counter where the slicing, dicing, marinating and stuffing has been done for me by the store’s “sous chef.”

These wily grocers are also bundling together other meal components right next to the meats and fish, which are easy to prepare and taste almost as good as my own, with a few finishing touches. I admit that on busy weeknights, going this route makes fixing dinner for two an easier and faster affair. Granted, I’m paying up for the pork roast with cranberry stuffing but still paying less than I would going out to eat. The supermarket’s profit is much higher as a result.

I’m still not using the on-line applications that stores are offering. There are well over 1,000 apps offered by my iPhone right now and that number is growing exponentially each day. More and more establishments are offering lessons in everything from basic cooking to preparing for your next Super bowl party. Healthy eating for you and the family, educational courses and advice in weight loss management, heart, diabetes, food allergies and even family mealtime management are now offered along with countess recipes and food guides.

The bottom line seems to me that we are all paying more while the supermarkets are making more as a result, but the added services and products seem to be a fair trade. That’s a win-win for everyone.