Just about everyone is aware of the California water crisis. You may be tempted to simply dismiss this on-going event as a local problem, but it isn’t. Our world is running out of water and we are on the brink of a freshwater shortage. 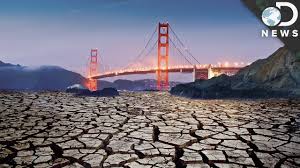 At least that is the conclusion of NASA, in a recent report that argues that even giant lakes are disappearing. The agency believes that sometime within the next 35 years the globe will be facing a long and protracted drought of epic proportions.

You might say, “So what? We have plenty of time to come up with solutions. Besides, the ‘authorities’ will handle it.” A look at what is happening in California might dissuade you of that view.   Take the Sierra Nevada snowpack, which supplies much of that state’s water needs in places like Los Angeles, San Francisco and the Central Valley farms. The snowpack is at a 500-year low. It won’t be rebuilt anytime soon.

California is the nation’s largest agricultural producer and exporter. It grows more than a third of all our vegetables and two-thirds of our fruits and nuts. The Central Valley, an area roughly 450 miles long and 60 miles wide, is also the U.S.’s top dairy producing region. Thanks to the drought, the water bill for just one 10-acre farm was $33,000 last year versus $3,200 the year before. Farm losses this year could total $2.8 billion.

But it is not only the economic loss that must be calculated. The damage to wildlife is enormous. At least 18 species of fish, including salmon and trout, face extinction. Five million birds or more migrating along the Pacific Flyway are also at risk of starvation and disease.

You may or may not believe global warming is behind this crisis, but leaving aside this debate, both sides cannot dispute that the overuse of groundwater from aquifers is a leading factor worldwide in the coming crisis. Aquifers are underground layers of rocks, sand and silt that store fresh water. These natural wells can be thousands, if not millions, of years old. We have been pumping water out of these wells for eons. Entire cities have sprung up above these natural wells and that has become a problem.

Some aquifers are shallow enough to be refilled through precipitation over time. Unfortunately, for places like California, where the area is experiencing both record lows in rainfall and snow (in addition to record heat) that process is not occurring. And even if it was, the key word in replenishment is time. Many cities, states and countries are running out of time. Even worse, many more aquifers are deep underground and once depleted are gone forever.

People in Iran, Brazil, and the United Arab Emirates, to name just a few affected areas, are already suffering from this water shortage. Without water, food becomes scarce, employment disappears and political unrest springs to the forefront. Some argue that the conflicts in Syria are more about the lack of water and all the hardship that it creates than it is about politics or religion. Scientists also point to groundwater contamination by pesticides, fertilizers and even hydraulic fracking as another cause of water shortage globally.

As for the “authorities”, although California has known of their water shortage problem for decades, it was only this year that Governor Jerry Brown implemented the state’s first water use restrictions. Restrictions, by the way, are not solutions. Combating this coming worldwide drought will require money, years of effort, and both radical and innovative responses by everyone.

Many solutions are already available. Solar-powered water purifiers, desalination plants, leak monitors, CO2 cleaners, even technologically innovative shower heads are available. What is lacking is the will to implement these solutions now.

Today’s politicians are hoping that this year’s El Nino will provide enough rain to break California’s drought so that the water shortage problem will go away. This out-of-sight, out-of-mind approach to this impending challenge is about what we can expect from our “authorities.”

In the meantime, while we wait for this crisis to develop, why don’t you begin by doing your part? Go spend the money to at least buy a new water-efficient shower head. Over the course of the next decade, it could save the world thousands, if not hundreds of thousands, of liters of water every year.