He certainly took his own sweet time getting here. Investors had just about giving up hope that the traditional Santa Claus Rally would occur this year. But despite gyrating energy prices, worries over the economy and the looming next earnings season, stocks are on the upswing. 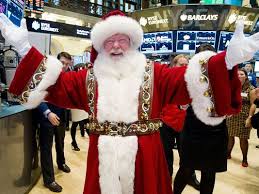 Of course, I am writing this on the Wednesday before Christmas because even the most devoted columnists take off on the holidays. We could still fall back tomorrow, but the markets are only open for a half the day so I’m guessing we maintain this week’s gains.

It would be nice if the market continued higher into next week. If so, my forecast of a single digit gain this year might actually unfold. Let’s stay optimistic, shall we and hope for the best. In the meantime, investors, Wall Street strategists and assorted pundits are becoming increasingly downcast concerning the prospects for next year.

The litany of worries is growing. I already mentioned earnings, which begin shortly after the New Year. Forecasts are somewhat dismal with the usual cast of culprits responsible for the expected disappoint results. Oil, the strength of the U.S. dollar, forecasts for further interest rate hikes, growing default risk in the energy patch, weakness of world economies, led by China, these concerns are nothing new to us. They have kept a lid on stock market performance all year and it looks like they will continue to weight on the market in 2016.

About the best you can say is that these issues are well known and, for the most part, already discounted by the markets. That leaves some room for upside surprises. There is a good chance that Chinese officials will announce further stimulus measures to turnaround their economy early next month. Some companies are going to report better than expected results in January and many will do better than analysts predict. They always do.

Most Fed Heads do not expect another rate hike by the Fed before at least the end of March, if then. Oil prices still remain a wild card and while I do not think energy prices have bottomed, there is at least a 50-50 chance that we could get a “dead cat bounce” before energy resumes its slide. That too would cheer the market, at least in the short term.

It could explain this week’s market come-back, which has been led by a rise in energy prices. Beaten down material stocks have also been in favor although there has been no triggering event that would justify such moves. Unfortunately, that calls into question the durability of this rally.

Nonetheless, let’s all be grateful for any gains at all. Next week could see a continuation of this up move, in which case, the year could end in positive territory for all three averages. Given that it is an optimistic time of year, I’m betting for more gains. In the meantime, put the markets on hold for the rest of the week and have yourself a merry little Christmas.