New Hampshire is behind us, but voters’ new found populism is just beginning to impact the presidential elections. Could there be real change brewing as a result? 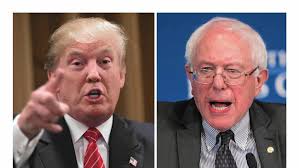 Readers may have noticed that thus far. I have avoided commenting on the candidates, their rhetoric, or the impact November’s elections will have on the economy and the stock market. I did write a column last year pointing out that for most of the candidates, it is not about winning the election. It is more about obtaining higher speaking fees, selling books, the next job offer as an “also ran,” and what lobby will pay the most for influence.

Recently, however, I have detected an element of populism across party lines, as candidates have claimed why they (and not the next guy) are the true voice of the people. Bernie Sanders and Donald Trump (no matter how you feel about their politics), can be credited with igniting the populist fuse. The keg of American gunpowder attached to that fuse has been the subject of dozens of my columns through the years.

You can take your pick. Income inequality is a big issue. So is our continued anger with those who engineered the financial crisis and walked away scot free and richer than before. People are frustrated with an economy that seems to provide more minimum wage jobs than quality positions. We are disgusted with a political system that represents more of the same back door, cloakroom politics, fueled by big pay-offs to the high and mighty. And the recurring question: “Why are we paying more and more taxes to a government that performs ten times worse than the worst employee in our company?”

It is too early to predict how this perceived wave of populism might impact the markets, although I do believe that campaign rhetoric has contributed to the volatility on the markets year to date. Make no mistake, this presidential campaign will continue to have an impact on the global markets this year. As the list of outrageous promises grows longer, as the “get them” quality of political speeches grows louder, so too will the uncertainty in the markets. And uncertainty breeds volatility. To date, campaign rhetoric thus far has candidates clamping down on the biotech sector, controlling the banks, cutting taxes, ordering our corporations to repatriate profits from overseas, and arrest most of Wall Street for fraud.

This rhetoric, in my mind, is simply mirroring the growing anger we all feel and have felt for many years. I will say I would rather have this venting by vote, than the apathy that has afflicted the silent majority for far too long. Hang on to your hats, dear readers, because I believe this venting is going to get louder. By this summer, when both parties’ conventions will be the nation’s center of attention, the rhetoric will reach a crescendo.

Although this rhetoric will create a great deal of stress, the outcome, in my opinion, will be extremely positive for stocks and the economy on the whole. Whatever party gets in (and whoever wins the presidency) will introduce a Reganesque- type platform of economic reform. Taxes will be cut on corporations and individuals, while a program of fiscal spending will be launched that will finally return the economy to its historical growth trajectory.

The ingredients of some of this fiscal spending boom are already in place, passed by both houses and both parties back in December. The five-year, $305 billion highway and transit spending bill is just the beginning. There will be much more to come and remember folks, you heard it here first.

On another note, I will not be publishing a @theMarket column this week, but will be back next week.