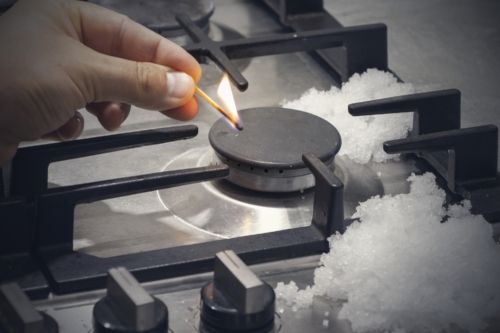 Winter approaches and with it a potential natural gas crisis. Areas of Europe are already scrambling to find the energy required to heat homes and continue their economic rebound. Could the U.S. be next?

Over the last year, prices for European natural gas have jumped by almost 500%. Natural gas prices on this side of the pond have also spiked by more than 100% this year. But it isn’t just countries in the Northern Hemisphere that are feeling the scarcity. Parts of Asia, which are importing liquified natural gas (LNG) at record prices, are being forced to switch to coal and heating oil as LNG shipments decline. Japan and Korea are somewhat protected so far, thanks to their use of long-term LNG contracts, but not so with China.

China, the world’s largest importer of natural gas, is having a power crisis as a result of the shortages. Many provinces are rationing electricity to industries. This is resulting in production cutbacks in cement, steel, glass, plastics, and a host of other products.

Brazil, and other areas in South America, depend on hydropower for much of their energy. However, serious drought has reduced the flows in various rivers such as the Parana Rover basin. The output of energy has declined to the point that utilities have been forced to make up the loss through natural gas imports.

The present shortages have multiple sources. Industrial production in this post-pandemic world has surged, which has expanded demand for natural gas and LNG. Climate change from a cold and flooding European spring to a grueling hot summer in Asia also boosted energy demand. Russia, the main gas supplier to most of Europe, has been piping less gas into European stockpiles. Whether by accident, or on purpose, is anyone’s guess.

Alternative energy sources have also contributed to the present shortage. Politicians, ESP advocates, and the wind and solar sectors have argued that “going green” makes increased investment in natural gas production and exploration unnecessary. Only now, in this crisis environment, is the world realizing that transitioning to cleaner fuels will require a decades-long period. In the meantime, we will still need natural gas as an integral ingredient to the world’s power supply, which fuels so much of our industrial and residential sectors.

This winter, with huge demand from the world, importers are looking to Qatar, Trinidad, Tobago and especially the U.S. to increase supply. Unfortunately, the U.S. is experiencing its own shortfall in supply. Blame climate change, once again, for some of that. Summer heatwaves and back-to-back hurricanes have disrupted production and distribution, while increasing overall energy demand and consumption. Our own economic recovery has also diverted more consumption of natural gas away from residential use to industrial sources.

Then there is the reduction of U.S. gas production. “Fracking” has become a dirty word in many areas of the country. As a result, shale drillers are far more focused on achieving acceptable climate goals and increasing dividends and buybacks of their stock than in raising production. Energy analysts predict that there is little new gas coming online anytime soon–an increase of just 1.1% over the next six months. That is a big change from the recent past when our domestic surplus of gas was climbing steadily, and exports of U.S. LNG was the wave of the future. In the short-term, there is no real alternative to looming shortages.

Readers should brace for the highest energy prices they have seen in many years this winter. But if that is the only impact, we should consider ourselves lucky. The risk is that we follow Europe’s and Asia’s lead and experience widespread cutbacks in production. That would damage economic growth, while adding to the already rising rate of inflation. An environment that could cause stagflation. About the best we can hope for is a mild winter, but in this era of disastrous climate change, what are the chances of that?