The S&P 500 Index broke through an important technical level this week. It is an encouraging sign and could mean that over the next few days that index could move even higher. 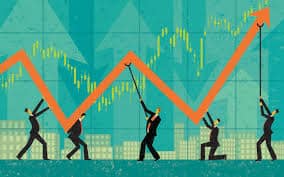 There are all sorts of technical levels that traders study. In the intermediate term, they usually look at the 50 day moving average. For the first time since the beginning of the year, we have broken up and through that level at 1,954 on the S&P. For those less inclined to worry about the charts, all you need to know is that traders are becoming bullish.

As I suggested in my last column, it was a week where markets first consolidated, and then climbed higher, supported by an oil price that refused to drop below $30/BBL. It appears that OPEC and non-OPEC members have agreed to meet in March. Investors are hoping that a deal to freeze oil production will ultimately morph into an agreement to cut production. This is despite Saudi protests that there is no plan to cut production in the works. I guess hope springs eternal in the energy patch.

At the same time, investors are also hoping that this weekend’s meeting of the G20 in Shanghai may result in a plan to spur global growth. At least that is what both the Organization of Economic Co-operation and Development and the International Monetary Fund are hoping to accomplish. Whether their call for “bold” action by the G20 will result in anything more than statements about working together, etc., etc., are doubtful.

Economic data this week were better than expected with GDP coming in at 1% over the last quarter (0.7% expected) while personal Income (0.5%) and spending (0.5%) were also higher than estimates. These numbers fly in the face of those worrying that the country is falling into a recession.

Does that mean we are destined to go straight up from here and regain all the year’s losses? Well, not quite yet. It is true that as of today the S&P 500 Index is only down 5% for the year. That’s is an improvement from two weeks ago for sure. Still, we face a great deal of uncertainity even now.

Oil is still a wild card, as is this year’s presidential elections. Super Tuesday ( March 1), is when 12 states hold primaries. In all, 595 Republican delegates–about 25 percent of the total number–are at stake. Republicans need 1,237 delegates to win the party’s nomination. Democrats need 2,383 with 1,004 Democrat delegates up for grabs next week.

The outcome may be an important boost for the markets, if there are clear winners in both parties. That would remove some of the uncertainty plaguing investors, and certainty is always preferable to the markets. We could possibly see a relief rally as a result that could take us up to the 2,000 level on the S&P 500 Index. At that point, things get trickier, and what happens after that is still uncertain.