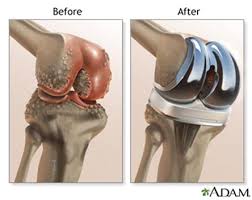 Over the next five years, health care spending in the U.S. will total $21 trillion. Spending on health care in America today represents over 17% of the United States economy. By 2017, that number will climb to almost 20% of spending. Now I know why.

Experts agree that as much as 30% of that annual spending goes to wasteful, redundant or inefficient medical care. Where does the rest go? Well, there are many factors including higher prices for medical services, paying for volume over value, for defensive medicine, the use of new technologies and treatments without considering their effectiveness and a lack of transparency of information on prices and quality.

Recently, I had a chance to study some of these variables since I recently underwent a Total Knee Arthroplasty surgery in January. The joint replacement medical business is a good area to highlight, since over 7 million Americans have gone under the scalpel for these procedures. Most medical researchers believe a million or more consumers per year will have their hip or knee replaced in the future.

As I wrote in a former column (“The Joint business is jumping”), the cost to you, the consumer, varies widely. There are hospitals in California that have charged $200,000 or more, while medical centers in places like Montgomery, Alabama, charge less than $12,000. What’s worse is that there is no correlation between how much you pay and the level of outcome. One study of 2,750 hospitals offering hip and knee replacement surgery per year found that those hospitals performing over 200 joint replacement surgeries per year had lower rates of infections, heart attacks, serious complications and death.

Sadly, hospitals charge, and insurance companies pay, what the traffic will bear. If you live in Denver, Boston, Manhattan or other affluent population centers, you pay more, substantially more. As for me, my bill finally arrived and the total cost was $40,000, not counting the outpatient physical therapy and follow-up doctor visits. My deductible was $1,000.

Mark Sprague at Berkshire Orthopedic Associates at the Berkshire Medical Center was my doctor. He and the other surgeons in that unit perform almost 400 surgeries per year. Here is how my charges broke down. Three days in a semi-private room at $899/night came to $2,697. That’s about the same charge one would pay for a three-day stay at an ocean front suite in an exclusive resort in Maui.

The implant itself was roughly $9,500. The actual manufacturing cost and mark-up of implants is a tightly held secret and medical device manufacturers demand that hospitals sign confidentiality agreements preventing them from releasing implant cost data. The best I could come up with was an estimate from Orthopedic Network News that reported that average selling price for a knee implant increased 92% to $5,428 from 1991 to 2008. In which case, we are looking at a 75% mark-up for a new knee.

The operation itself came to $15, 291, not including an additional $2,337 for the recovery room. The fees for the anesthesiologists amounted to another $3,000. Drugs, lab work and other pharmacology accounted for the rest. Physical and occupational therapy (both in and out patient combined) came to another $2,000.

I also saved a considerable sum by passing up a continuous passive motion (CPM) device, at the doctor’s suggestion. Until recently, The CPM has been popular among many hospitals. It is a device (ranging from $425-$2,500) that slowly and gently flexes the knee after surgery automatically. However, its results appear to be no better or worse than the patient’s own efforts at improving the knee’s range of motion.

All in all, my experience in tackling the health care system was fruitful. I did my homework, talked to my healthcare provider, got second opinions, understood my options and had a pretty good idea of what lay ahead of me. If one considers health care as simply another product one purchases and consumes, than the onus is on you the consumer to opt for the lowest cost, highest quality experience you can buy.